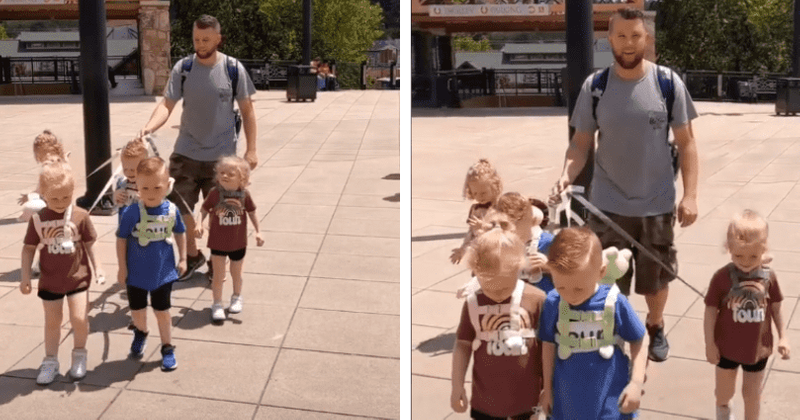 When quintuplets were born to a Kentucky couple, their lives were permanently altered. But he never expected the intense criticism and animosity that would follow his parenting decisions.

Parents are busier than anyone who work a full-time job, and couples frequently have to pick up new skills on the job. No matter how hard they try, parents can never get everything right, and when there are multiple children, the task is even more difficult.

Even though there are many sleepless nights and sacrifices involved, being a parent is incredibly rewarding. Unfortunately, not everyone can see what parents do for their children, and observers can be cruel.

The five lovely children that Jordan Driskell and his wife Briana had—Zoey, Dakota, Hollyn, Asher, and Gavin—were loved by both of them. Although raising quintuplets required a substantial change in lifestyle, the couple relished every moment.

Jordan’s parenting decisions didn’t impress many online users, and they made that obvious in their comments.

To make sure their brood was cared for and safe, they had to devise a number of inventive parenting strategies. Full-time care was needed to run their household, and dad Jordan was always eager to spend time with his children.

Even though it could seem like a nice idea to take the kids on a trip to the park or an enjoyable day of amusement, Jordan knew it was never simple and always came with some worries.

The effort required to leave the house with all five children was medal-worthy. To help their family travel around, Jordan and his wife first used a stroller with six seats. However, they adjusted their look and went with something less absurd and bulky.

Every time they left the house with all five of their children, the devoted parents started utilizing a leash—and it worked for them! The pleased father shared:

“Children want to run off and explore because they are so interested. We utilize a leash for our own mental health and sanity. Additionally, it relieves our stress so that we can leave the house and enjoy ourselves as a family.” Another argument for utilizing a leash was made by Jordan, who mentioned that his children always preferred to stroll in crowded areas. The leash kept each child from straying off, which was a safety concern.

The straightforward tool gave the youngsters the much-desired freedom while simultaneously giving the parents some measure of control. Jordan soon learned, though, that his parenting style wasn’t popular after sharing a video in 2022.

With a unique twist—they were on a leash—the youngsters were having a great time at the aquarium. As soon as the video got viral, internet users didn’t hold back. Jordan’s parenting decisions didn’t impress many online users, and they made that obvious in their comments. Commenters questioned his conduct, and one suggested that if he wasn’t up for the challenge, he should have had less children:

“This is deeply disturbing. Teach your kids to behave so you don’t have to use a dog leash. Not cool.”

“Leashes on kids should be illegal. You have your opinions but it’s just wrong, even rabbits don’t go on leashes, why should children?”

Positive reaction was also there in the comment section, with parents complimenting the dad’s deeds. Parents commended him for putting his family’s safety first, and some thought it was a brilliant idea:

“I said, ‘I’ll NEVER put my kids on a leash!’ As a mother with two energetic toddlers at the same time, I grabbed the first monkey backpacks with leashes I could get my hands on!”

“Anyone who disagrees with his method has never taken care of five toddlers at one time! Even preschools use a rope system to walk to the playground.”

“I had one for my daughter – nothing wrong with it – she was able to run around but close enough to me in a crowd.”

“If you are being judged for protecting your children, then the judgmental folks have no clue about the value of life on any level.”

Parenting and youth development specialist Dr. Deborah Gilboa offered her opinion on the use of a leash. She backed the method and referred to it as “creative problem-solving.” The physician added:

“This is not treating children like animals. The option would be to simply remain in. Even if you are unable to relate to the issue, it still exists.”

A different pediatrician expressed a different opinion. He said he opposed using leashes on children because it treated them like pets. The specialist explained:

“I am well aware of how nimble, impulsive, and unpredictable children can be because I am a father of three. But in terms of injuries, I would be concerned about entanglement or choking.”