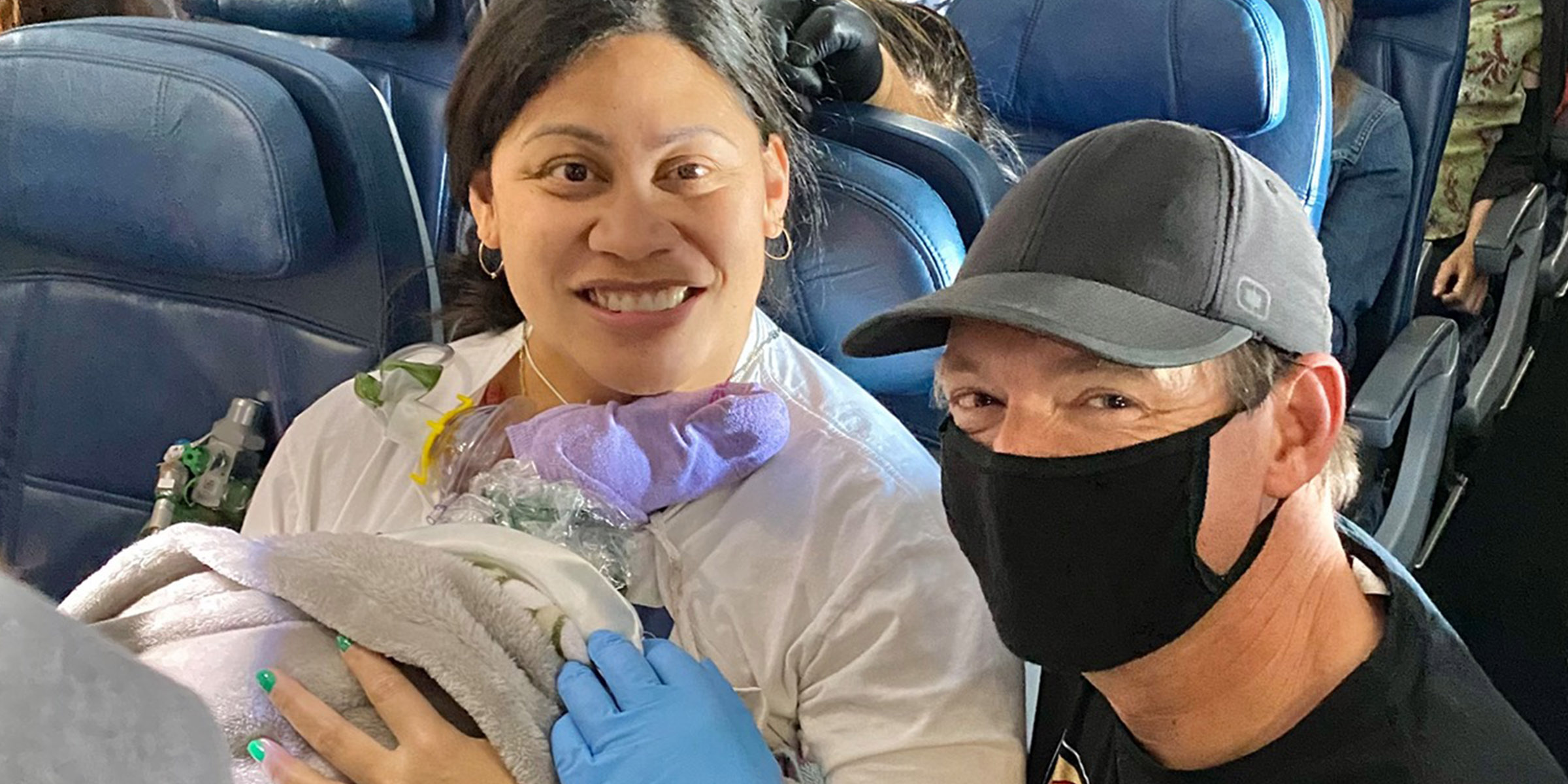 When we least expect it, life has a funny way of shocking us. During a flight, one woman experienced an unbelievable blessing, and her once-in-a-lifetime event left people dumbfounded.

Lavinia ‘Lavi’ Mounga has a unique story to tell. She gave birth to a baby boy while flying, and the biggest surprise of all was that she had no idea she was pregnant!

Following the news of her unexpected aircraft pregnancy, Mounga’s birth tale went viral. On The Ellen Show, the mother told her story of the incredible occurrences that impacted her life forever.

She walked to the restroom since she was having stomach problems and cramps on a Delta flight. Mounga sat in her cubicle for a long time, suffering and in pain, completely oblivious that she was in active labor.

“I boarded the plane but couldn’t get comfortable enough to sleep. I got out of bed, had cramps, and went to the bathroom. For a brief moment, I passed out. The baby was here when I awoke.” Mounga was a mother when she awoke, which was a huge shock to her. Her pregnancy was mysterious, which is sometimes linked to hormonal imbalances.

Women are unaware of their pregnancy until they are far along or in labor due to this syndrome. It affects roughly 1 in 400 women, which is more common than many people believe.

Raymond was born miraculously, but his trials and fight for survival had only just begun. He was premature and 40,000 feet above the ground, far from the medical help he need.

The baby and his mother needed help because he was born at 29 weeks. Five healthcare professionals happened to be on board the plane by chance, and they were all eager to help.

Posted by Hawaii Pacific Health on Sunday, May 2, 2021

Lindsay Maughan, a physician assistant, overheard Mounga’s sister-in-law calling for help. “I leapt up from my seat and raced up to the bathroom,” Maughan explained.

Mounga was cradling the little infant when she opened the door. Thankfully, three neonatal critical care nurses were on hand and quickly set to work.

They also used microwaved bottles, as well as a variety of other inventive ideas, to keep Raymond warm. Dr. Dale Glenn, a family care physician at Hawaii Pacific Health, was also instrumental in the patients’ stabilization.

Glenn was sound asleep until his daughter reminded him that he needed to see a doctor. He instantly provided his expertise and expressed gratitude for the presence of the NICU nurses.

Posted by Hawaii Pacific Health on Sunday, May 2, 2021

The doctor explained that the baby was not breathing as well as they had hoped. He added: “There was no sobbing from the infant. You would normally want to hear more noise. This was the quietest delivery I’ve ever seen.”

They built a makeshift incubator and rejoiced as the baby began to warm up and “pink up.” He revealed:

“The first hour was quite difficult, but this is a tough little boy.”

The crew also kept an eye on Mounga, and were pleased to see that she remained stable despite the trauma. While she was overwhelmed, she was appreciative to the crew for doing everything they could to assist her.

“I’m just so fortunate. I don’t think he’d be here if they weren’t there.”

Glenn expressed his gratitude for the opportunity to meet Mounga and her son. He was also granted the honor of giving Baby Raymond a second name.

Glenn’s daughter came up with the lovely Hawaiian name Kaimana. It represented the sea’s strength, and all parties involved thought it was appropriate because Raymond was born flying over the Pacific Ocean.

The Kapi’olani Medical Center for Women and Children treated Mounga and her baby. During their stay at the institution, the medical staff paid them a visit, which was an emotional experience for everyone.

said Nurse Ho: “We were all in tears. She addressed us as aunts and referred to us as family.” They were overjoyed that the couple was in good health. Mounga and Raymond were doing well and had overcome an ordeal that only a few individuals have experienced.

“There have only been roughly sixty babies born aboard airplanes in history,” Glenn said. Without a doubt, the crew felt privileged to be a part of such a one-of-a-kind experience.