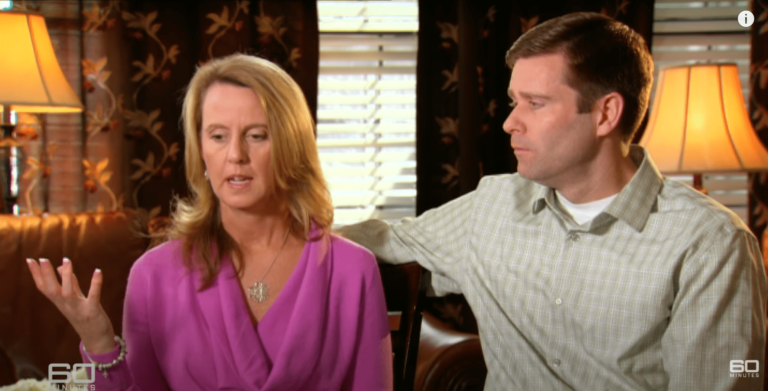 Sean and Carolyn Savage always wanted a big family and worked hard to make it a reality. Carolyn once joked that her husband wanted nine children, but they only had four or five.

The Ohio couple took several efforts to increase their family, including freezing their embryos at an IVF clinic. They had no idea that their decision would result in severe and life-long suffering.

Sean and Carolyn already had three children when they married in 2009: adolescent sons Drew and Ryan, as well as Mary Kate, born ten years after her brothers through IVF.

The then-mom-of-three decided it was time to try again, this time with IVF. They had already frozen their embryos, so all they had to do was go in for the implantation and wait for the results.

Carolyn and Sean received the excellent news they had been waiting for ten days after the embryo was implanted. The doting mother would have a fourth child, but the story took a sharp left after that.

Sean was contacted by the couple’s doctor, who explained that Carolyn had been implanted with the incorrect embryo. As they saw their long-awaited wish slip from their fingertips, the news ripped through the Savages’ home. Carolyn explained:

“No one should ever have to go through what we went through.”

Shannon and Paul Morell, from Michigan, were the parents of the embryo. The two couples had their embryos stored in the same facility, according to the tale, and the discrepancy occurred because Shannon’s maiden name was Savage.

Carolyn and her husband were stumped as to what to do. Carolyn’s sole alternative was to terminate the embryo, but she chose not to do so. The mother decided to keep the pregnancy since she knew she would give the kid to the Morells when she gave birth.

Carolyn added that she felt for the Morells and knew they would be frantic to know “their child was safe” if she went through with it, risking her life for another person’s baby.

Carolyn added that she would have been unable to live with herself if she and Sean had decided to abort the kid. The day of delivery was the most heartbreaking part of it all for the Savages.

Carolyn brought the pregnancy to term and gave birth to a baby boy named Logan, but she was not allowed to spend time with him. Carolyn felt a bond with Logan because she had given birth to him.

She remembered not wanting him to leave, but she knew it would have been wrong. Carolyn couldn’t handle it, but she maintained her good faith. She revealed the date of the baby’s birth:

“I kissed his cheek. I was holding him. I cried. But I was also aware that we were running out of time. Shannon and Paul were in another room, waiting.”

Sean also expressed apprehension about handing over the baby to his parents when the time came. While recalling the traumatic experience, his voice became thick with emotion, and tears streamed down his face.

Logan’s birth-related problems were far from done. Carolyn began to hemorrhage even as she delivered him safely through C-section. Fortunately, medics were able to stabilize the situation.

Logan was returned to Carolyn a day after his birth so that she could spend some time with him. She recalled bringing him up to her body, cuddled up against her flesh.

Carolyn had no further physical contact with the baby after that. She and Sean also discussed Logan’s first birthday and how disappointed they were not invited. They recognized, however, that they had no influence over the situation. Carolyn’s doctor had told her that her chances of falling pregnant again were slim to none by the time she had Morell’s child. As a result, she and her partner decided not to try to conceive naturally.

After that, the couple decided to surrogacy. Sean and Carolyn made headlines again in 2011 when they announced the birth of twin girls through surrogacy.

Logan turned two months before the couple became parents to the girls. Sean and his longtime wife made the following announcement in a public statement:

“Every well wish and blessing we’ve received from real friends like you has humbled us tremendously. You consoled when shock and sadness struck. You squeezed our hands in encouragement and reminded us not to lose faith as we started to lose hope about growing our family.”

The then-new mother reflected about Logan’s birth and referred to him as a gift. She went on to say that she and her husband were fortunate enough to discover someone who assisted them in the delivery of their healthy twin children.

Carolyn was in her early forties when she gave birth to her twin girls; four years later, she was well into her forties. However, in the events that followed, her age proved to be a false fiction.

Carolyn had come full circle after trying to conceive naturally, going through IVF, and then giving birth to another woman’s kid. Her body, however, felt different one day in 2014.

Carolyn took a pregnancy test, and instead of the normal one-line indicating “not pregnant,” the image was odd. Carolyn saw two lines instead of one, indicating that she would be a mother once more.

Her and her husband had previously written a book called “Inconceivable” on their parental struggle, but their story finally took a good turn. Carolyn was speechless and took several minutes to process what had transpired.

She marveled at the miracle that occurred in her life in an open letter published on Today. After years of being unable to conceive, the mother of six was surprised to find herself pregnant at 45.

Carolyn admitted that she and her husband had unprotected intercourse from the beginning of their marriage, but becoming pregnant was a whole different story.

“That is not how I became pregnant. To conceive, I needed medicines, ultrasounds, needles, blood tests, petri dishes, physicians, surgery, and truckloads of cash.”

Carolyn remembered researching the chances of the pregnancy surviving the first trimester and discovering they were poor. She and her husband decided not to dwell on it because they believed the fetus had no chance of survival.

Carolyn’s first trimester passed quickly, with her fetus gaining strength. She had a cell-free DNA analysis at 25 weeks, revealing that they were expecting a son.

Carolyn and Sean Savages’ story is one of faith and endurance, but one thing they never lost sight of was God’s will. They demonstrated that God understands what everyone deserves at the right moment, including miracles.