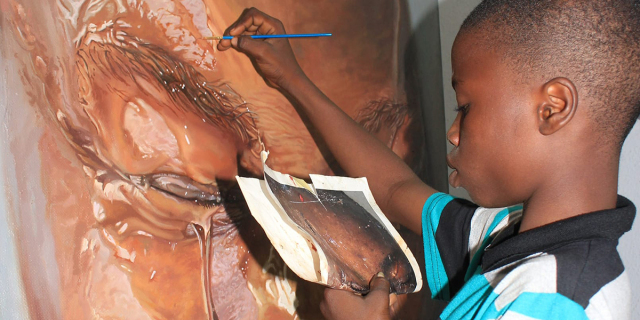 Kareem Waris’ art is inspired by Michelangelo and depicts the truth of life.

Kareem Waris began drawing at the age of six. The young Nigerian acquired such a knack for a type of painting known as hyperrealism in just a few years that world leaders tweeted about his incredible abilities.

The young artist initially gained attention after appearing in a brief BBC film a few years ago. The 11-year-old highlighted in the study is capable of capturing what he sees in everyday life with the same accuracy as a photograph. What distinguishes his art is not just the remarkable level of detail, but also the concerns that the young child wishes to bring to light.

You can see more of Kareem’s meticulous work, including his favorite, “Daily Bread,” in another film created by CGTN Africa. Because of the title and the idea behind it, the youth considers this to be his greatest effort.

A small child feeding himself with a spoon may be seen in the remarkable work. Kareem adds that the youngster is covered in sweat and tears to represent the hard labor his family does before sitting down to enjoy a meal. Kareem is motivated by this.

The now-professional artist aspires to be the next Michelangelo by putting his God-given skill to good use. There’s little question he’ll achieve great things thanks to his amazing eye for detail, his family’s support, and his ability to understand and record what’s going on around him.