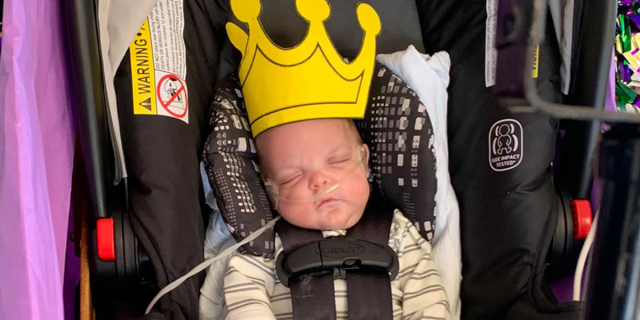 Doctors were skeptical, but Baby Russell Appold turned out to be a genuine life miracle.

Russell Appold Jr. was dressed like a king when he left the hospital on October 1, the appropriate outfit for a tiny boy who had struggled for his life since his birth at 22 weeks gestation.

His survival signals the end of a very trying period in his mother and father’s lives, Natasha Williams and Russell Appold Sr. Before the birth of Russell, the couple had lost three pregnancies, each with no heartbeat. Fortunately, physicians discovered Russell had a healthy heart, but his mother, Natasha Williams, had a problem with her cervix 15 weeks into her pregnancy.

Doctors conducted an emergency surgery to avert an early labor. While this kept baby Russell safe for the next few weeks, Williams went into labor at 22 weeks: “My fiance and I both wept and we started praying,” she told Kake.com.

Her one-pound baby boy was delivered on Friday. Despite physicians’ predictions that he wouldn’t live, Russell and God had different ideas.

Russell flourished and overcame the odds because to the dedicated staff of Tulane Lakeside Hospital in Louisiana’s NICU unit. In an interview with Good Morning America, his mother said, “I don’t think he would be here if it wasn’t for them and God.”

The courageous young boy, who now weighs a healthy 8 pounds, survived a variety of medical difficulties, including jaundice and blood on the brain, to be able to return home on October 1 to meet his two other siblings.

His experience, like that of other successful preterm deliveries, emphasizes the necessity of parents and medical professionals thinking about resuscitation when their kids are delivered at 22 weeks.

“We are in competition with fetal lung embryology,” says Lisa Barbiero, a neonatologist at Tulane. “There comes a time when the lung is too young to function without the help of the placenta in gas exchange. While the odds are still stacked against these babies on the verge of survival, when the entire team, from high-risk OB to neonatology, is on board with a family’s request for resuscitation attempts, we have seen dramatic improvements in survival (5 percent to nearly 20% in some cases) of infants born at less than 23 weeks.”

Williams has created a Facebook group, Baby Russell’s Journey, to assist other new parents as they adjust to postpartum life with their babies.