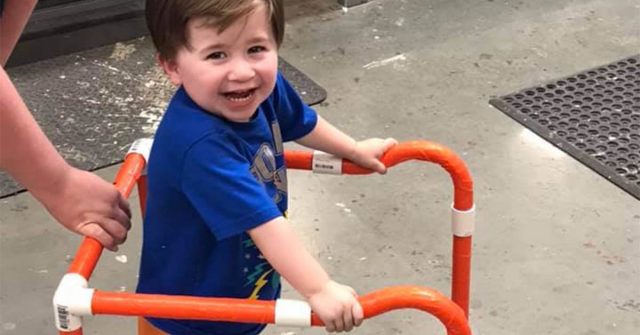 When Christian and Justin Moore’s 2-year-old son Logan needed a walker, friendly employees at their local hardware shop, made one for them for free.

Logan Moore is two years old and was born with hypotonia, a condition that decreases muscle tone and makes it difficult to maintain balance. When his parents sought aid, a physical therapist suggested that they obtain him a gait trainer, which is a wheeled gadget that helps those who can’t walk on their own. The Moores didn’t believe their insurance would cover one, and even if it did, they figured it would take too long to obtain permission, so their only option was to try to build one from scratch. 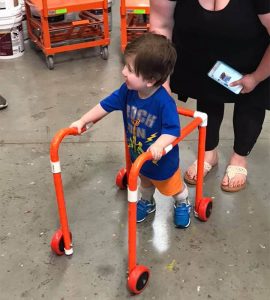 They went to YouTube to find instructional videos on how to make a child’s walker out of PVC pipe, then prepared a list of the supplies and tools they’d need before heading to their local hardware shop in Cedartown, Georgia. When they arrived, Christian asked a store clerk if anybody could assist them with their supply list and described what they were attempting to accomplish for Logan. 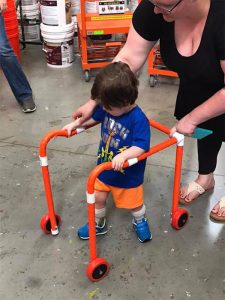 Jeffrey Anderson, the shop manager, and another employee came to greet her.

“So today a lady and her mother and husband came in informing us that their insurance company might or might not pay for their young boy’s walker, so they went online and found plans to construct one out of PVC pipe,” Jeffrey explained.

Rather of allowing Logan’s caring parents to attempt to construct him a walker on their own, Jeffrey and his boss instructed them to go grab some ice cream and return in an hour. 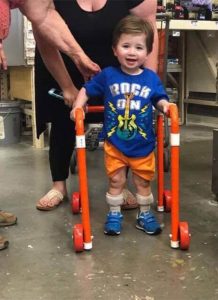 “When my shop manager heard about it, we walked over to them and looked at their ideas and said, ‘We got this,’ so we started putting everything together and told the family to go have some ice cream and come back in one hour,” Jeffrey explained.

Christian was ecstatic that they would go to such lengths to save her kid.

“I couldn’t believe they’d go to such lengths. It took everything I had not to cry because my son’s journey has not been easy. He has struggled with tasks that most children his age would find simple,” she explained.

Other staff arrived to assist in gathering the necessary supplies, and within an hour, they had successfully constructed a robust, functioning walker out of PVC tubing for Logan, who is two years old.

“Other associates began to pitch in, and by the time the family returned, it was all done,” Jeffrey explained.

Logan couldn’t stop grinning as he returned to try out his new walker. Employees and colleagues were brought to tears by the delight in his smile.

Logan’s name was even printed on the front.

“Everyone was sobbing because they saw Logan go around with the greatest smile on his face, and when the family attempted to pay us, we told them, ‘No way, this one is on us.’ Thank you to everyone who assisted and for being such a blessing to this family and this young boy.”