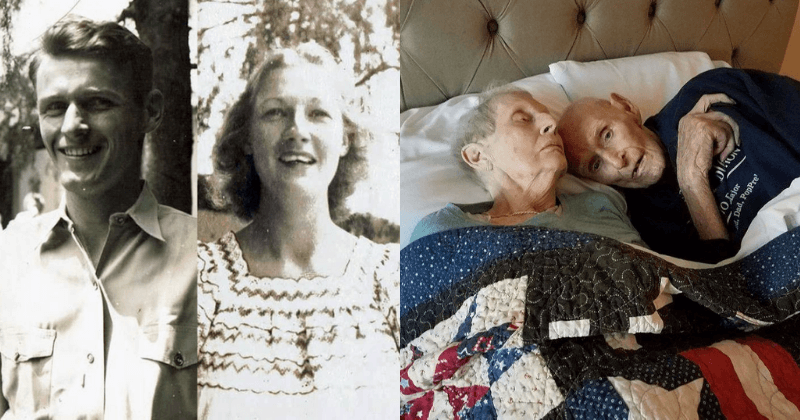 Hearing a real love story is like a breath of fresh air in an age of transient relationships and no-commitment “dating” apps. Isabell Whitney was born on October 31, 1921, and Preble Staver was born on October 17, 1921. The future lovebirds met on a blind date while they were both studying in Philadelphia. This blind date would culminate in a marriage lasting 70 years.

The United States entered World War II just as their passion was blossoming. They resolved to join forces to help their country. Preble enlisted as a Marine and Isabell worked as a Navy nurse in Maryland, where she received a Bronze Star.

Beginnings of a 70-year marriage

Preble and Isabell’s 71-year marriage came to an end on October 25, 2017, but not without making a lasting impression on their children and others.

Laurie Staver Clinton, one of the Staver’s five children, recalls her parents as the brightest and most optimistic of lights.

The Staver family’s lives were filled with love, but they did not always have it easy. After the war Preble worked as a lobbyist and banker. As a result of his employment, he and his family were forced to relocate around the United States, including to Florida, South Carolina, and Virginia.

Aside from the difficulties of migrating, they also had to deal with the death of their son, Peter, in 1975, who died in the final football game of his senior year.

Laurie told PEOPLE, “At that time, we started to really see a gentler side of my dad. Parents aren’t meant to bury their children, and it really took a toll on my folks, but it also brought them closer.”  “Things like that may either drive a relationship apart or bring them closer together, but they made a promise to go through it together. They were each other’s biggest cheerleaders.”

Isabell began to exhibit indications of dementia after a long period of time. In 2013, they chose to relocate into a long-term care facility in Norfolk, Virginia, with the support of their children.

This was a particularly difficult shift for Preble. Watching his wife slip more and deeper into dementia was devastating, especially given the stress of a new surroundings. Despite the fact that they were staying in the same facility, they were forced to sleep in different rooms.

“They just discovered a new method to communicate their love. Dad would wheel himself down to the Memory Care Unit and see mum even after he had ceased walking and was in a wheelchair,” Laurie recalled. “The first thing they did when I reunited them was put their hands out and grasp each other’s hand, telling each other they loved each other.”

Preble had only one wish in the days leading up to his 96th birthday: to take one last snooze with Isabell. He was able to fulfill his dream thanks to the wonderful team.

It was impossible to nap in the comfort of each other’s company because they were separated by rooms. But this time, Preble and Isabell shared this gift one more time for over three hours.

“The two of them didn’t say a single word to one other. They just fell asleep holding hands.”

Isabell passed away a few days later, on October 25, 2017. Laurie was able to get Preble there in time to say his goodbyes, thankfully.

Preble passed away 14 hours later, on the same day.

It’s as though he wanted to make sure she was going to be okay before taking his own life. Others will think he died of grief.

“Mom and dad really exemplified the idea that if you make a commitment, even if life gets in the way, you work through it,” Laurie said. “And you live your life with each other.”