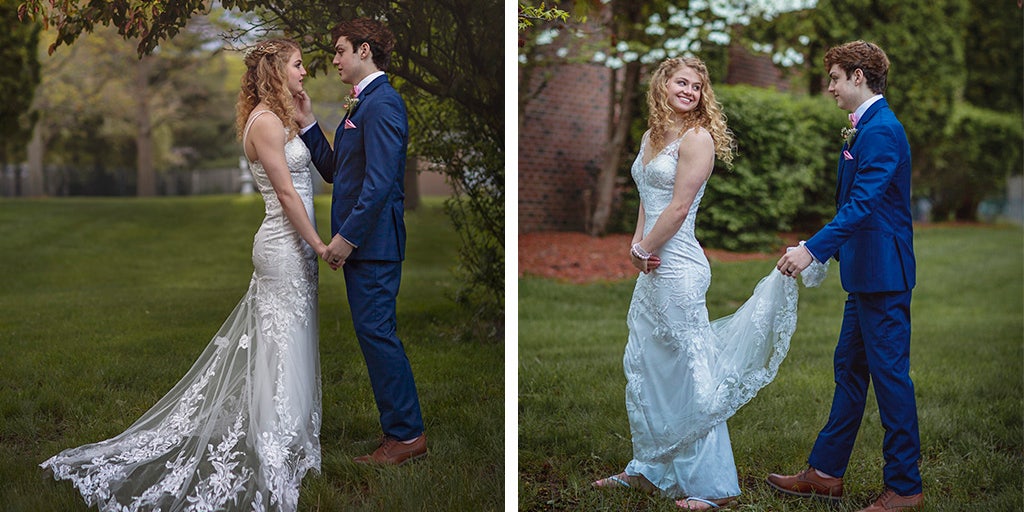 Chase Smith, 18, has been diagnosed with terminal cancer after a six-year fight with cancer. With only three to five months to live, he determined that the most important thing in his life is his great love for Sadie Mills. In April, the couple married in their driveway, surrounded by friends and relatives. This is the story of their love.

Chase Smith, a former competitive swimmer for Indiana High School, was diagnosed with cancer when he was 12 years old. He was coping with his illness by attending to school and participating in sports like any other youngster. He was a nationally rated swimmer who spent much of his time competing in swim meets. It was here that he first spotted Sadie.

Sadie is also a swimmer who plans to join the collegiate diving squad next year. Chase saw her for the first time six months ago, right before a match. He approached her, thinking she was pretty attractive, and struck up a conversation with her. The next day, they swapped phone numbers and began messaging back and forth.

Their first date came about as a result of their texting. The rest, as they say, is history. Since then, they haven’t gone more than a few of days without seeing one other.

Sadie was enamored with him because of his strong faith and maturity.

“He was such a sweetheart. He’s a gentleman. She says, “He’s a wonderful Christian guy.” “We were just smitten by each other’s characteristics. He is everything that counts to me right now.”

Chase’s tumors reappeared this past March, six years after his initial diagnosis, this time taking over his back, hip, shoulder, and lung. By late April, he was experiencing excruciating pain in his temples and left eye. More tumors were discovered on a visit to the oncologist, this time within his skull. Chase’s prognosis was bleak: he only had three to five months to live.

The Decision to Get Married

The devout couple frequently attends church and prays together every day. They call the time they decided to marry a “God moment,” and they’ve scheduled dinner dates with both of their families to talk about their intentions.

“I told them how much Sadie had transformed my life and how much I loved her, how precious she had been to me, and how there is no one with whom I can open up about my personal life and cancer battle like I can with her,” Chase said. “She can calm me down in a variety of situations when no one else can.”

Both families were in tears, but they backed Chase and Sadie’s choice wholeheartedly. They planned the ceremony for a few days before being married four days later. The dying high school senior marries his high school sweetheart in the end.

The couple married in Sadie’s parents’ driveway in front of their closest friends and family. Chase picked her up on their first date here, and the couple also had their first kiss. When Sadie walked down the isle, no one in the audience was dry eyed, even Chase, who couldn’t hold back his emotions.

The wedding of Chase and Sadie was a celebration of life and love. It’s difficult not to see how much they adore each other. Chase’s mother compared it to a Hallmark love story, saying that a bond like the one her son and Sadie enjoy is rare.

Chase is choosing to focus on the good despite the fact that the odds are stacked against him. He wants to spend the remaining time on this planet loving, laughing, and genuinely living.

“Take every moment you have with the valuable people in your life, no matter how long they are in your life. In those relationships, have fun and give everything you’ve got. And know that when your love involves God, there is so much that can be done with love,” he says.

Chase has set up a GoFundMe page to aid him with his cancer treatment. It has raised almost $98,000 of their $150,000 target thus far. You can assist Chase by donating to the website and spreading the word about his story using the hashtag #chasestrong.