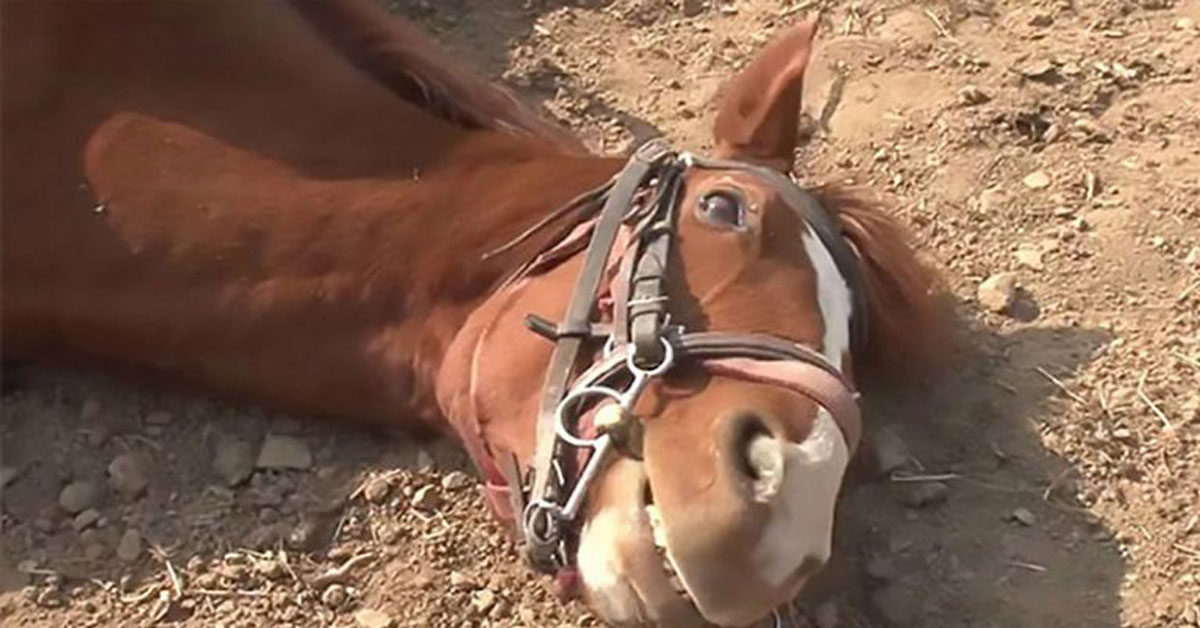 Somebody bring to this muscular actor an Oscar… Jingang, called the world’s laziest horse, is a Korean horse named after a Chinese city that has had enough of carrying heavy passengers on his back multiple times a day. He devised a cunning plan to avoid having to ride people across the countryside — he pretended to be dead. Jingang would drop to the ground, close his eyes, and lie motionless, pretending to be dead, whenever a rancher approached with a guest who wanted to ride him. He despises skin abrasions and will go to great measures to avoid them.

The world’s laziest horse gets better at it every day

Jingang can be seen flopping to the ground in fast motions even while people are sitting on his back in a video that has over 2.8 million views on YouTube. He’s grown so skilled at it that he’ll fall over before anyone gets on his saddle, thrusting his tongue out and lifting his hooves high in the air.

His owner described him as “cute yet mischievous.”

The lazy daisy performed a quick double-take to the ground as he noticed one of the ranchers racing toward him in one of the video. Jingang steadily began to rise after the rancher left. The rancher then returned to him, rushing fast and shouting. Jingang slumped back down to the ground in an automatic manner. He kicked furiously in the air for a few seconds, as if he was distressed, and then laid still. This horse is a fantastic theatrical artist.

Jingang has been given up on by everyone at the ranch since he appears to be impervious to horse training.

Jingang has a lot of admirers online

The Asian stallion’s antics have amused millions of people online, and he’s been dubbed a genius who is much too smart to be a horse.

One YouTube comment said, “That horse is a genius, wish I could simply do that every time someone I don’t like comes near me.” “The same thing happened to me when I was a youngster riding a horse… He collapsed and feigned to pass out… But when I placed some chana in front of his lips, he awoke…,” said another.

Some people may be too affected by the horse’s antics. “When my sister wakes me up to get ready for school, it’s definitely me.”

Jingang has it all figured out, and the greatest thing is that he doesn’t seem to mind what others say. The pampered brat is having the time of his life.