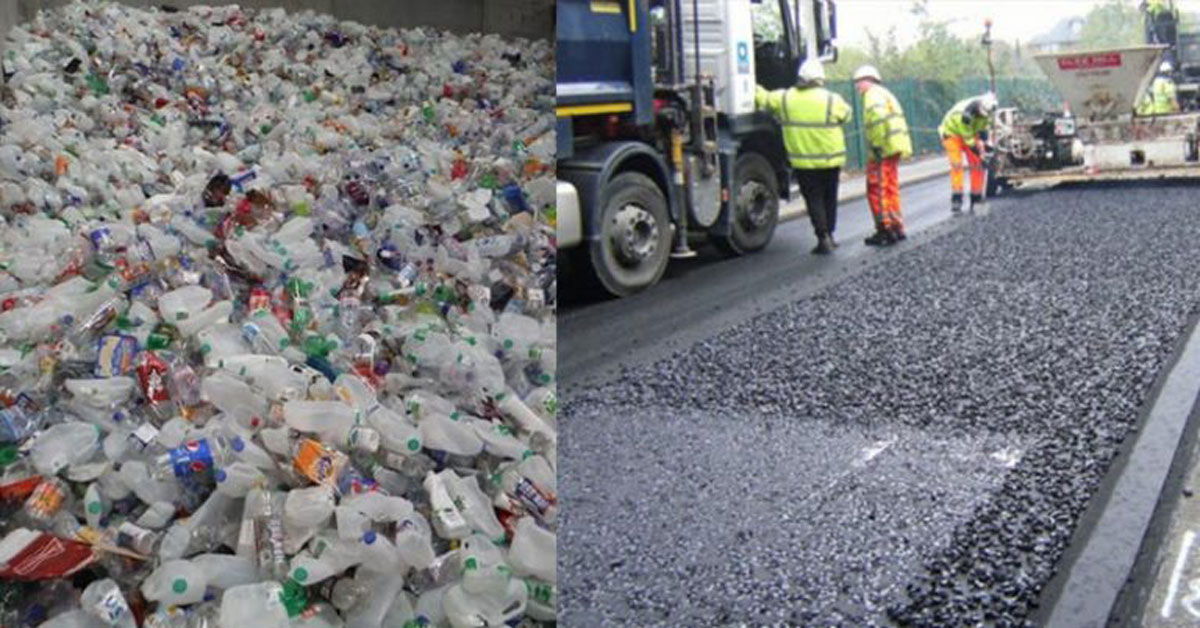 Plastic has become virtually indispensable to our civilization since its invention in 1907. Its low cost and long life have made it an essential component of many of our society’s technological achievements during the previous century.

However, as you are probably aware, plastic has now grown into a major issue that poses a serious threat to our ecosystem. The quantity of garbage created by single-use plastics is strangling our animals, hurting our health, and ruining our planet, from waves of plastic trash washing up on beaches to islands of plastic floating around in our oceans.

Scientists, engineers, activists, and policymakers from all over the globe are working to discover ways to minimize, if not eliminate, the quantity of plastic that ends up in landfills and ends up in our ecosystems. One firm in the United Kingdom has devised a method to accomplish this while simultaneously repairing our roads.

Tony McCartney, the company’s CEO, had the concept while working in Southern India. He was there on behalf of a charity that assists individuals whose job it is to collect possibly recyclable goods from landfills and sell them so they may be reused. He discovered that some of the “pickers'” plastic garbage was utilized to patch potholes in the country’s roadways. The procedure went like this:

Instead of forming MacRebur with his two pals, Nick and Gordon, McCartney reasoned that councils in the United Kingdom would not appreciate the concept of setting plastic on fire in the streets. The three of them spent the following few years determining the optimum method for granulating waste plastics and incorporating them into the construction of an improved asphalt road. The firm now offers three waste plastic additives for use with conventional asphalt.

Making Roads Out Of Plastic

So, how do you transform a discarded plastic water bottle into a road? Of course, the first step is to collect the plastic garbage that was previously intended for the dump. These plastics are then separated into groups based on their polymer architectures (ie- plastic bottles versus plastic bags).

The business then divides the plastic into three sorts of pellets: MR6, MR8, and MR10, with each type differing in terms of durability and intended usage. Because it is resistant to road deformation, MR6 is best suited in places with a lot of slow-moving, heavy vehicle traffic, such as junctions and roundabouts. The MR8 is recommended for parking lots, driveways, and local roads, whereas the MR10 is recommended for highways where fracture resistance is critical. After that, the pellets are melted down into bitumen. Bitumen is a thick, black residue that forms after the distillation of petroleum and serves as the adhesive that holds asphalt together. The pellets, according to McCartney, may be seamlessly integrated into any existing asphalt infrastructure.

The biggest issue with plastic roads is whether microplastics would leak into our environment when it rains, but McCartney is certain that this will not occur. This is because the plastic pellets are blended smoothly with conventional asphalt, resulting in a substance that contains no real plastics.

Solving Two Problems at Once

“We’d like to fix two global issues. On the one hand, we have the waste plastic pandemic, and on the other, we have the bad road quality that we have to drive on today,” McCartney adds.

The business says that its roads are sixty percent stronger and may last up to three times as long as regular roads, and that each tonne of this new asphalt includes roughly twenty thousand plastic water bottles or seventy thousand plastic bags. The American Society of Civil Engineers estimates that there are four million miles of road in need of repair in the United States. The quantity of plastic saved from landfills if those roads were replaced with MacRebur asphalt would be enormous.

MacRebur Plastic Roads Company has now supplied pellets for roads in the Gulf, Canada, Australia, and New Zealand [6]. The first plastic road in the United States was created at the University of California, San Diego, in 2018. After UC San Diego Construction Commodity Manager Gary Oshima approached him about a possible cooperation, MacRebur offered the pellets to the project. The firm was ecstatic to collaborate with the school, which has similar ideals, according to McCartney.

“Developing alternate applications for recycled plastic will be a critical issue that we must all overcome, and maintaining over four million miles of roads in the United States will be an ever-growing problem,” said UC San Diego’s Oshima. In addition to repurposing unwanted plastics that might otherwise end up in landfills or the seas, [this technology] decreases fossil fuel use and harmful off-gassing throughout the production process, helping to safeguard the environment.”

More Companies Are Making the Switch

Other firms are exploring similar technology, and these new plastic highways are proving to be quite successful. Shisalanga Construction was the first business in South Africa to build a partial-plastic road. The firm has already covered over 400 meters of road, preventing nearly 40,000 plastic milk bottles from entering landfills.

TechniSoil Industrial, located in Los Angeles, has invented a comparable method to MacRebur and plans to pave LA’s first plastic road. What sets TechniSoil apart is that this innovative technology will allow the road itself to be recycled completely.

Sean Weaver, the company’s president, stated, “That’s always been the holy grail of the road building business.” “Could you recycle 100 percent of the road’s top surface, grind it up, smash it, and reinstall it with the same durability as the original hot mixed asphalt road?”

The Problem Has Become the Solution

The most serious issue with plastic is how long it takes to degrade in our environment. However, the technology that each of these firms use has turned it into their greatest asset.

“At the end of the day,” McCartney adds, “plastic is a fantastic product.” “It lasts a long time, which is an issue if it’s a waste product but not if we want it to.”

MacRebur, Shisalanga, and TechniSoil are all instances of ecologically friendly and commercially successful innovation. As technology advances, we should expect to see better roads and less plastic in the ditches as a result.