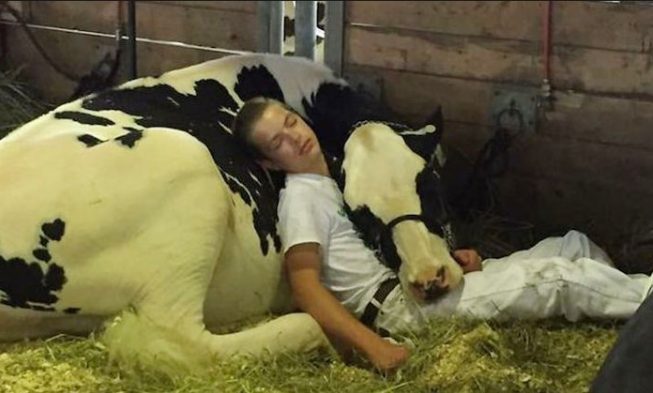 Despite the fact that there are several instances in which people and animals have a strong relationship, this one takes the cake.

This image, in particular, demonstrates how deeply a boy and a cow may bond over the course of time spent getting to know the animal.

Despite the fact that Audri and Mitchell did not win any ribbons, this photograph captured the hearts of many people all around the world.

The photo quickly went viral, attracting the attention of media sites such as Fox News and CBS News, and providing us all a glimpse into the life of hardworking Midwesterns.

Mitchell and Audri decided to take a sleep after weeks of planning and being awake till 3 a.m. on the day of the event after it was completed.

Audri came in fifth place out of a total of seven participants in that competition. Mitchell’s father, fortunately, noticed his kid and the cow asleep and snapped a snapshot of the two of them, which went viral across the world.

Mitchell was nevertheless proud of the effort he and Audri put in, despite the fact that they did not win any awards as he had planned.

The Des Moines Register was perplexed by the replies to this attractive portrait, and wondered what it was in it that moved people.

“It recalled memories for individuals of growing up on a farm and the love and care for their animals while rearing them for county fairs and 4-H shows,” they said. It brought back memories of the commitment and hard effort required to get up at 3 a.m. for your animal. People highlighted the routine maintenance required to display an animal, such as washing, trimming, and walking them continuously. For others, it’s the extraordinary relationship that humans can have with creatures that are nothing like them and weigh ten times as much as they do.”

This photo elicited some harsh reactions from the internet community, who were concerned about what would happen to the cow after it returned to the farm.

Mitchell’s father, Jeremy, took to social media to respond to the reaction, reminding everyone that raising animals requires a lot of love and attention:

“Unless you want to earn a livelihood from it, livestock is reared with more blood, sweat, and tears than you can ever comprehend. Livestock are raised with their well-being at the forefront of their minds.

Our own health, comfort, and well-being take a back seat to theirs. Whether it’s milk or meat, we know they’ll satisfy hungry tummies at some point. It’s never been about farmers being unconcerned about the welfare of animals.”

“The problem today is that less and fewer people are aware of where their food comes from, and they are unable to accept how food arrives at their table because no one is prepared to tell them this reality.”

Many individuals own pets, and many more grew up in 4-H clubs raising farm animals for show or sale, and they realize the joy that animals can offer to people, as well as the bond and feelings of love that both the person and the animal share.

Mitchell Miner described how he felt to the Des Moines Register, saying, “She loves to lay down quite a bit.” She simply likes being in my company.”