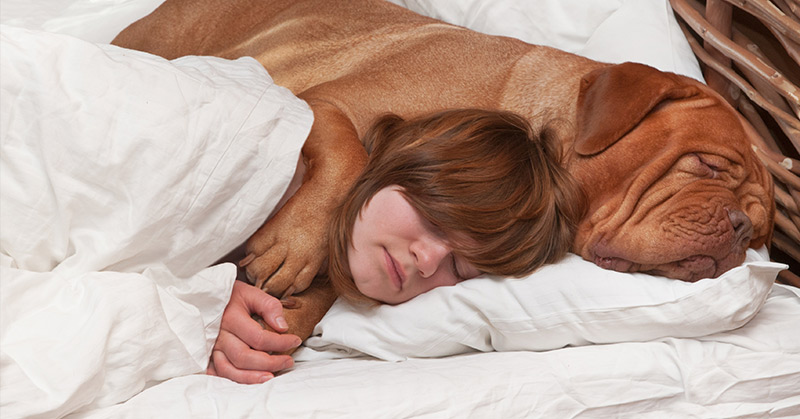 The question of whether or not humans should sleep with their dogs has long been debated. Some believe that having a dog or cat in your bed is unsanitary, while others argue that it makes it more difficult to get a decent night’s sleep.

With all of this uncertainty, you may be wondering, “Should I let my dog sleep on my bed?”

Perhaps you already allow your pet into your bed despite the objections of others, or perhaps you’re thinking about it but aren’t sure if you should. While there are advantages and disadvantages to sharing your bed with an animal, pet owners will be relieved to learn that there are several advantages to snuggling with their dog at night.

According to a 2015 study, those who engaged in animal-assisted activities (i.e., activities with a dog rather than alone) had fewer depression symptoms.

But how do dogs have such an impact on humans? Interacting with our dogs can induce a rise in oxytocin, popularly known as the “love hormone”, according to a Japanese study. Basically, the higher your oxytocin levels are, the happier and less depressed you are.

Theta brain waves are a type of mental calm that occurs during deep meditation and the REM stage of sleep. Other occasions when humans experience these types of brainwaves include daydreaming, running, showering, or any other activity that is repetitive and automatic. It allows people to think freely, which is when they frequently come up with brilliant ideas or answers to issues.

When pet owners are with their dog, their oxytocin levels rise, which promotes theta brainwaves and improves sleep quality.

Insomnia is frequently provoked by anxiety and stress, but it can also be caused by a medical problem. People with obstructive sleep apnea (OSA), nightmares, narcolepsy, parasomnias, and other sleep disorders may benefit from sleeping with a pet, according to studies.

Pets lower anxiety and create a sense of security, which reduces hyperarousal and hypervigilance, making it easier for their owners to fall asleep. This impact has also been observed in people who suffer from sleeplessness as a result of PTSD.

Over the course of seven nights, a 2017 study observed the activity of both, dogs and their owners. The purpose was to determine the animal’s and human’s sleep efficiency and assign them a score out of 100. When you’re in bed, sleep efficiency relates to how much time you actually spend sleeping.

The study discovered that co-sleeping arrangements benefitted both humans and their dogs. The people in the study had an average sleep efficiency of 81 percent, while the dogs had an average sleep efficiency of 85 percent. A score of 80 or higher is deemed good. However, the researchers discovered that when a dog was present in the room but not in the bed, humans slept more efficiently.

Humans benefit from contact with dogs in a variety of ways, including improved cardiovascular health. Human-dog interactions, such as petting, have been demonstrated in studies to lower blood pressure.

Because dogs appear to provide a calming presence for most people, it’s likely that having a dog cuddling up to you all night can have the same effect.

That tranquil feeling you receive while caressing a dog is known as “The Pet Effect.” According to a survey of pet owners, 74% of respondents said their mental health improved after getting a pet.

This is related to the rise in oxytocin levels that pet owners experience when they spend time with their pets. Having your dog or cat in bed with you can help you get a better night’s sleep by lowering your anxiety levels.

Allowing your dog to sleep with your children (as long as they are old enough and not in danger) can really boost their immune systems. According to a 2004 study, children who were exposed to pets early in life had fewer allergies as they grew older.

It Isn’t for Everyone to Sleep with a Pet

Sleeping with your pet may aggravate your allergies and make it more difficult for you to get a decent night’s sleep if you already have them.

Furthermore, not all dogs make good sleeping companions. This is due to the fact that dogs are polyphasic sleepers, meaning they have three sleep/wake cycles per nighttime hour. Humans, on the other hand, are monophasic, meaning that we only sleep once every 24 hours. Dogs can also be light sleepers, which means they are more likely to wake up if they hear something.

Despite these limitations, research appears to point to a variety of advantages, which for many pet owners appear to exceed the negatives. So, if you’re considering about letting Fido into your bed at night, it wouldn’t harm to give it a shot, and if you’re currently sleeping with Fido on a daily basis, science says you can keep doing so.