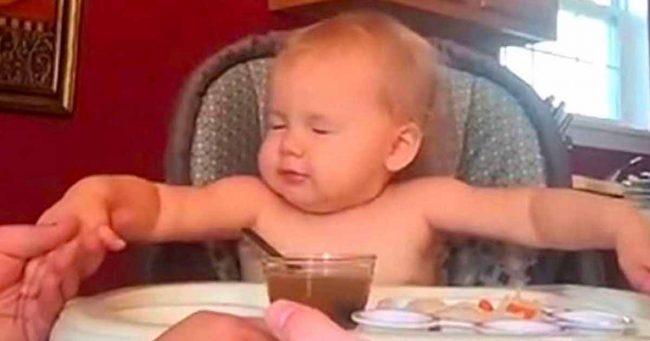 The majority of parents are unable to eat their meals without their children crying and running around. This toddler, on the other hand, had excellent table manners, and our hearts warmed.

The 15-second video has been viewed by millions of people on YouTube. According to some sources, a viral Facebook video was seen 38 million times.

The toddler is saying grace at the table before dinner with her family in this video.

At the time, Eloise Invorvaia was 20 months old, but she had better manners than most of us. When her father tells her it’s time to pray, Eloise knows just what to say.

In 2016, the video was uploaded to YouTube for the first time. Liz and John Invorvaia, who were residing in Indianapolis, Indiana at the time, published the video online. The gorgeous family currently resides in Waterville, Ohio. At Zion Evangelical Lutheran Church, John is the Director of Family Ministries.

Because Eloise enjoys praying, John made sure to explain that they must pray 4-5 times before each dinner. Quite a bit!

This family custom has something adorable and great about it, and Eloise has captured our hearts. The toddler’s popularity grew to the point where she was featured on Fox News, The Ellen Show, and The Today Show.

Following the video’s release, Elizabeth and John appeared on Fox and Friends Weekend, telling presenters that they are trying their best to teach their children the correct things. During his conversation, John expressed how God’s love always offers comfort.

At the time, Eloise knew 12-15 words, with “Amen” being her favorite. Of course, the toddler is too young to comprehend the significance of saying grace, but it was an excellent foundation for her future life.

Her generosity and love will inspire others to follow in her footsteps. More toddlers like her are needed in the world. Let us work together to make the planet a better place to live.