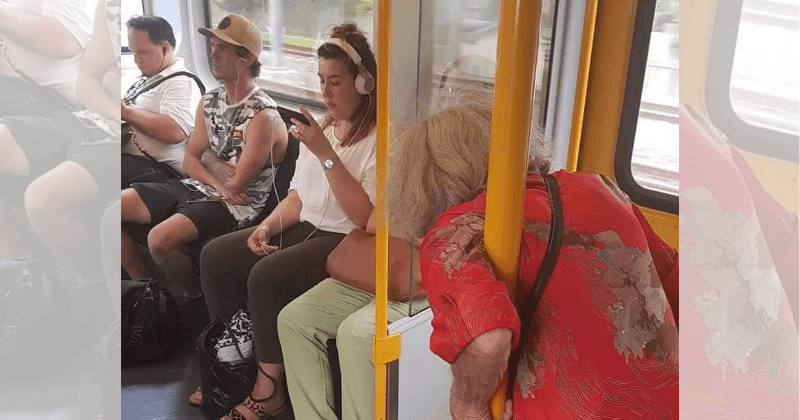 Everything you see on social media, take with a grain of salt. People are constantly publishing false information on the Internet. Images and videos can be misleading, especially if the context is unknown. Many people assume that they have the facts and jump to conclusions. That’s what happened in 2019, when a photo of an elderly woman standing on a train in Sydney sparked outrage. In the photo, the woman was holding onto a pole while four young commuters with headphones in their ears staid on their seats and ignored her.

The now deleted image was shared on Facebook groups including Aussie Aussie Aussie Aussie with a caption: No Respect. Unsurprisingly, it has been shared more than 22,000 times and received thousands of comments. Many of them slammed out at the other passengers for not giving their seat. “Heartless souls. Some say they are called the Millennial generation,” said one commenter on Reddit where the photo was reposted. 16-year-old guy added, “I would have offered my seat as soon as she jumped on the train; I’ve done it before for an old lady.”

Someone else comment was, “None of them had heard if she had asked for a seat, and they were sitting with earphones in or headphones on. Someone else was defending the guys, “Not defending them but… someone may have offered, but the elderly said ‘No It’s ok I’m getting off soon or at the next stop…”. Many people agreed with this view.

A third group of comments criticized the person who took the photo. “Why not man up and say something to them instead of taking a pic to get likes,” said one. “This is a typical person today, said another. Takes photos, complains on Facebook but in real life doesn’t have the balls to say anything”.

As the outrage continued, Sydney Trains issued a statement to the Daily Mail saying: “Sydney Trains encourages all of its passengers to observe appropriate transport etiquette including respecting elderly, disabled or pregnant customers by offering up their seats.” The new statement came from Ben Fordham’s 2GB radio show. This time it came from the grandson of the elderly lady in the photo. “The mature age lady was preparing to disembark at the next station — she’s my nanna.”

I suspect she was at the next stop, right. Fordham said that people were “too quick to judge” here in this situation. Seated commuters were vilified for doing nothing wrong in this case.

There is a second moral to this story, said  Sydney Trains chief executive officer Howard Collins. This is an opportunity to remind people that in their world of texts and headphones, they should always looking up and checking for their seats. This event was years ago, but the lesson is becoming more relevant day by day.

Most people have experienced annoying or rude people on public transport. Next time you see people refusing to give up their seat, there’s probably a good reason. Remember that people with diseases or disabilities are often invisible to outsiders.

In public transport, etiquette must be observed. Every time you board a bus, plane or train, make sure that you’re not that awful display.