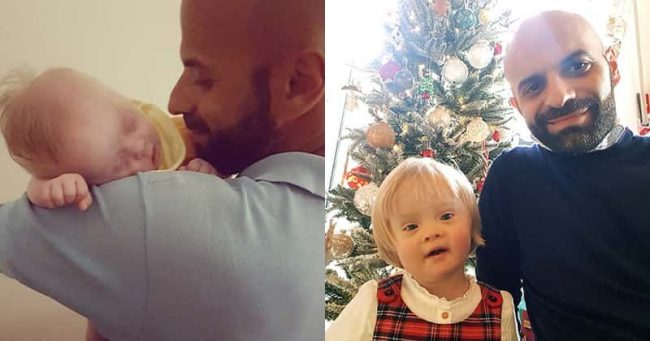 According to the National Down Syndrome Congress, about 6,000 babies are born with Down syndrome each year in the United States. Down syndrome can be a major challenge for parents, as the condition is associated with several health problems. However, the disease itself is not a serious obstacle, as it has taken advantage of advances in modern medicine to manage and improve various aspects of the life and life expectancy of people with the disorder. A study published in the American Journal of Medical Genetics has shown that families with people with Down syndrome have a higher satisfaction rate.

The following story is a happy one. A 42-year-old single Italian father, Luca Trapanese, met his two-year-old daughter Alba when she was just a few days old. She was put up for adoption but was rejected by more than 20 families because of her Down syndrome and they could not cope with adopting a disabled child.

Since he was 14 the kind-hearted man has been working with various social institutions including the Ruota Libera Foundation, a group which helps children with Down syndrome. But his greatest desire is to become a father. “I want to show my love, affection and knowledge to another creatures”.

Trapanese and his partner Eduardo had an idea past years, but then they’ve been separated. His experience made him determined to adopt a child, and he was sure he had the right tools to do so. He applied for a special register that would allow singles to adopt someone with a special condition. “A disabled child is not a second choice, it’s a conscious decision that I’ve made and I’m not afraid”.

In Italy, homosexual couples are not allowed to adopt children, so adoption by single parents was complicated until couple of years ago. He wanted to be a father of a disabled child who had been the victim of violence – an application that was rejected by most adoption agencies. He told that he want to adopted a child with an illness, severe disability or behavioral problems, even had been rejected by traditional families.

In July 2017, they called him and informed him about the girl he can adopt. Her name was Alba, she was 13 days old and she had Down syndrome. Her mother had abandoned her at birth and had been rejected by more than 20 families.

The 42-year-old father’s case has a huge impact on his home country’s as it battles numerous stereotypes about family, religion and fatherhood. He was thrilled from the first minute and knew he had found his daughter. Holding his daughter in his arms, he said: “I am so happy to feel that she is my daughter and that I am ready to become her father”.

Alba is now 2 years old and full of life, loves playing and dancing and has a strong personality. Her father added that she likes to be with other people and that he takes her on walks to the park, museums and work.

He says he is proud to be Alba’s father and admits that he sees himself in the future as he plans to spend the rest of his life with her. His life revolves around Alba today and he claims that she brought him joy and a sense of fulfillment because she revolutionized his life, which is now revolving around her. He has also published a book revealing his story, Nata Per Te (Born For You), written with Luca Mercadante.