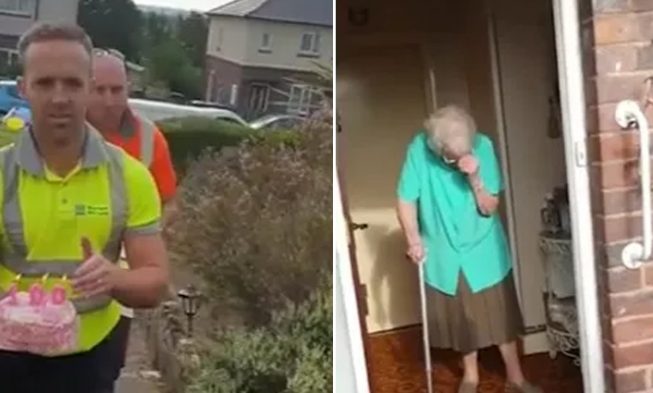 In a viral video, people’s hearts have melted in recent days. Ben Bird, a garbage man, walks with a pink-and-white birthday cake in his hand down a garden path. It is for his best friend Dorothy Ballard, also known as Mercy, who turned 100 on the same day. Ben has been collecting her rubbish for eight years.

On his visits, the two of them developed a friendship unlike any other. They always chat for about ten minutes every Thursday from 8:00 to 8:10 (the time of Ben’s visits). During their brief conversations, they talk about a variety of topics, from technology to family.

Ben had promised Mercy that when she turned 100, he would come into the house to bake a birthday cake. When Mercy’s eldest granddaughter Katy Smith shared the amazing video, it quickly went viral. When Mercy turned 100 that same day, Ben and two of his friends showed up at the door to surprise her and celebrate her birthday.

In the video, Ben can be seen walking into Mercy’s garden and waiting outside the door with a cake. After opening the door, he begins to sing Happy Birthday and is seen crying as Mercy holds her hands over her face, in a hint of surprise at his actions. After blowing out the candles, Ben tells everyone to make a wish and proposes that they live to 105. Katy is grateful for all the family, friends, neighbors and people like Ben who have taken time out of their lives to make her day feel special.