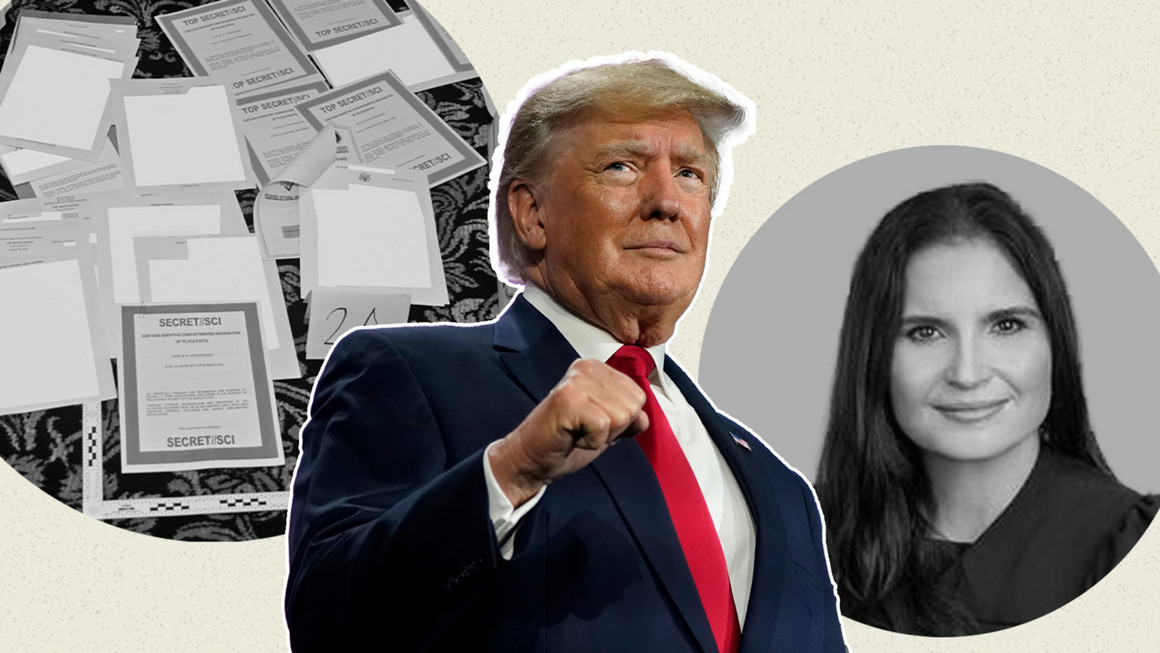 Despite being a member of the Federalist Society, the judge nominated by Trump made rulings about the Mar-a-Lago documents that were significantly at odds with conservative tradition.

One of the main criticisms of Donald Trump’s judge appointments was that they were clones of the Federalist Society who supported strong executive authority and rejected what some saw as court intervention in executive branch activities.

The latest rulings by Judge Aileen Cannon in the dispute over the secret documents the former president is alleged to have kept at Mar-a-Lago have completely refuted that notion.

Cannon, a 41-year-old former federal prosecutor and Trump candidate, made a number of rulings last week allowing the former president’s extraordinary requests in the investigation into the safekeeping of documents in his home.

The judge, in the government’s opinion, effectively halted the investigation by stating that prosecutors and the FBI could not use the seized information to interrogate any witnesses. The judge also ordered that copies of everything that was taken be given to Trump’s counsel.

Numerous legal experts, many of whom were on the right, harshly criticized the decisions, noting how far they strayed from the conservative judicial consensus. During her confirmation hearing in 2020, Cannon listed her membership in the right-leaning Federalist Society, which she had joined around the time she enrolled in the University of Michigan law school, on her comparatively brief resume.

Despite this association, many lawyers who favor broad executive authority claim that Cannon’s directions appear to conflict with the majority opinion among the well-known conservative lawyers’ group.

According to John Yoo, a law professor at the University of California Berkeley, “a robust understanding of executive power suggests it’s really not the duty of the courts to decide what’s classified or unclassified.” “I believe that the majority of those who support the unitary executive also believe that the president—the sitting, current president—determines what information is classified and what information is not classified.”

In an effort to respond to the historic FBI raid on Mar-a-Lago on August 8 in pursuit of proof of illegal retention of secret material, theft of government records, and obstruction of justice, Trump is questioning both of those concepts.

Trump’s case hasn’t been decisively won by Cannon on the substance yet. The special master procedure she has chosen, however, also seems to be open to the possibility that she or the master, Senior U.S. District Court Judge Raymond Dearie, might come to the conclusion that Trump declassified the documents with markings like “Top Secret/SCI” or that he has the authority to regulate their use.

One former Trump administration employee and attorney close to many Federalist Society officials said, “It’s a weird position. “It’s pointless… How will a judge assess if something will seriously harm the national interest? They are not competent in that area.

Cannon’s directives, especially her choice to halt the criminal investigation into Trump while the document review is ongoing, appear to many conservative attorneys to be an act of deference to the former president that is never shown to those who are the subject of national security-related investigations.

Having defended suspected spies and terrorists, Virginia-based criminal defense lawyer Edward MacMahon Jr. remarked, “I’ve never, in 35 years, seen an order like that in a criminal case.” Every espionage client I’ve ever had has expressed a strong desire for this judge to be appointed, as doing so would expedite the process and allow a special master to be appointed. It would be quite useful.

Lawyers who support a strong division of powers between the executive, judicial, and legislative departments find it especially galling that a judge would attempt to put a halt to a criminal inquiry.

The executive branch has sole authority to conduct inquiries and bring charges, according to MacMahon. The judge is not permitted to interfere with an investigation or prevent the executive branch from carrying out its current duties.

The prosecutors in charge of the investigation into Trump’s documents are also preparing their arguments in light of the possibility that some of the judges on the 11th Circuit’s bench, which is made up primarily of Trump appointees, will take issue with claims that the Justice Department needs autonomy and that the executive branch should continue to have virtually unrestricted control over matters of national security, including classified information.

Prosecutors asked the appeals court on Friday to exclude the roughly 100 papers marked classified from the larger review Cannon had ordered, arguing that courts had “executed considerable caution” before intervening through civil actions with criminal investigations or cases.

The Justice Department additionally cited a decision made just last year by the 11th Circuit in a case that was brought about by the controversial choice made by the federal government in 2008 not to charge financier Jeffrey Epstein with sex trafficking in connection with his encounters with teenagers. Similar charges were brought against Epstein in 2019, and he committed suicide in a federal jail in New York City approximately a month later.

According to Judge Gerald Tjoflat, a Gerald Ford appointee, “the notion that a district court could have any input on a United States Attorney’s investigation and decision whether to… bring a case” is “entirely incompatible with the constitutional assignment to the Executive Branch of exclusive power over prosecutorial decisions.” Judges Kevin Newsom and Barbara Lagoa, both Trump appointees, concurred with Tjoflat’s position.

In its final sentence, the Justice Department’s petition asking the appeals court for relief in relation to the Trump search claims that Cannon “erred by straying from the fundamental concept of judicial restraint.”

Conservative attorneys have not unanimously denounced Cannon for usurping governmental power. Some point out that she hasn’t yet rendered any firm decisions and is merely attempting to establish an orderly process in a highly unusual dispute involving a former president.

According to David Rivkin, a longtime Federalist Society member who worked in the Justice Department’s White House counsel’s office under Presidents George W. Bush and Ronald Reagan, “her appointment of a special master is a reasonable step given the factual disputes between DOJ and Trump’s lawyers regarding both attorney-client privileged materials and classified documents.” It aims to strengthen public trust that these situations are handled fairly and without placing an excessive burden on the government’s legitimate prosecution and national security objectives.

According to some well-known members of the Federalist Society, Cannon is merely clearing the way for the legal system to handle the legal ramifications of the search, such as whether Trump still enjoys executive privilege over the materials taken from his Florida property.

The extent to which a former president can claim the privilege even after leaving office is still up for debate, according to C. Boyden Gray, who worked as White House counsel for President George H.W. Bush. “I don’t believe it is true to claim that the privilege ends when the president leaves office. The concept goes further than that. The goal is to shield the president or his advisors so they can argue against a policy or play devil’s advocate without it being implemented a year later.

However, to vociferous detractors, Cannon’s orders so far in the Trump Mar-a-Lago documents battle stoke concerns about whether Trump-appointed judges are abiding by the ideals a lot of members of the Federalist Society have championed. The so-called “unitary executive” idea, which contends that the president has broad control over all executive authorities, is one of them. It holds that every member of the executive branch works for the president.

Eric Segall, a law professor at Georgia State University, said that what she is doing is clearly at odds with the unitary executive idea. “Obviously, a president who has left office is essentially a civilian—with the exception of receiving Secret Service and security briefings… Honestly, I find it hard to believe these orders.

Trump was the first presidential candidate to essentially outsource much of the judicial nominating process to the organization, despite the Federalist Society being created in 1982 and progressively increasing in popularity. He also made public lists of candidates for the Supreme Court that the society and the Heritage Foundation had examined.

Trump’s judges haven’t been on the bench for very long, but there is some evidence that they may be more hostile to law enforcement than their Republican-appointed predecessors and even many judges named by Democratic presidents. This suggests that some of the judges Trump appointed may have been influenced by his public criticism of the FBI.

Segall remarked that he believes the Washington lawyers associated with the Federalist Society and the academic members of the organization have different perspectives on Cannon’s decisions.

The liberal lecturer stated, “I believe there to be a division there.” “The vast majority of Federalist Society professors I know and follow believe this to be terribly incorrect. Bravo to them.