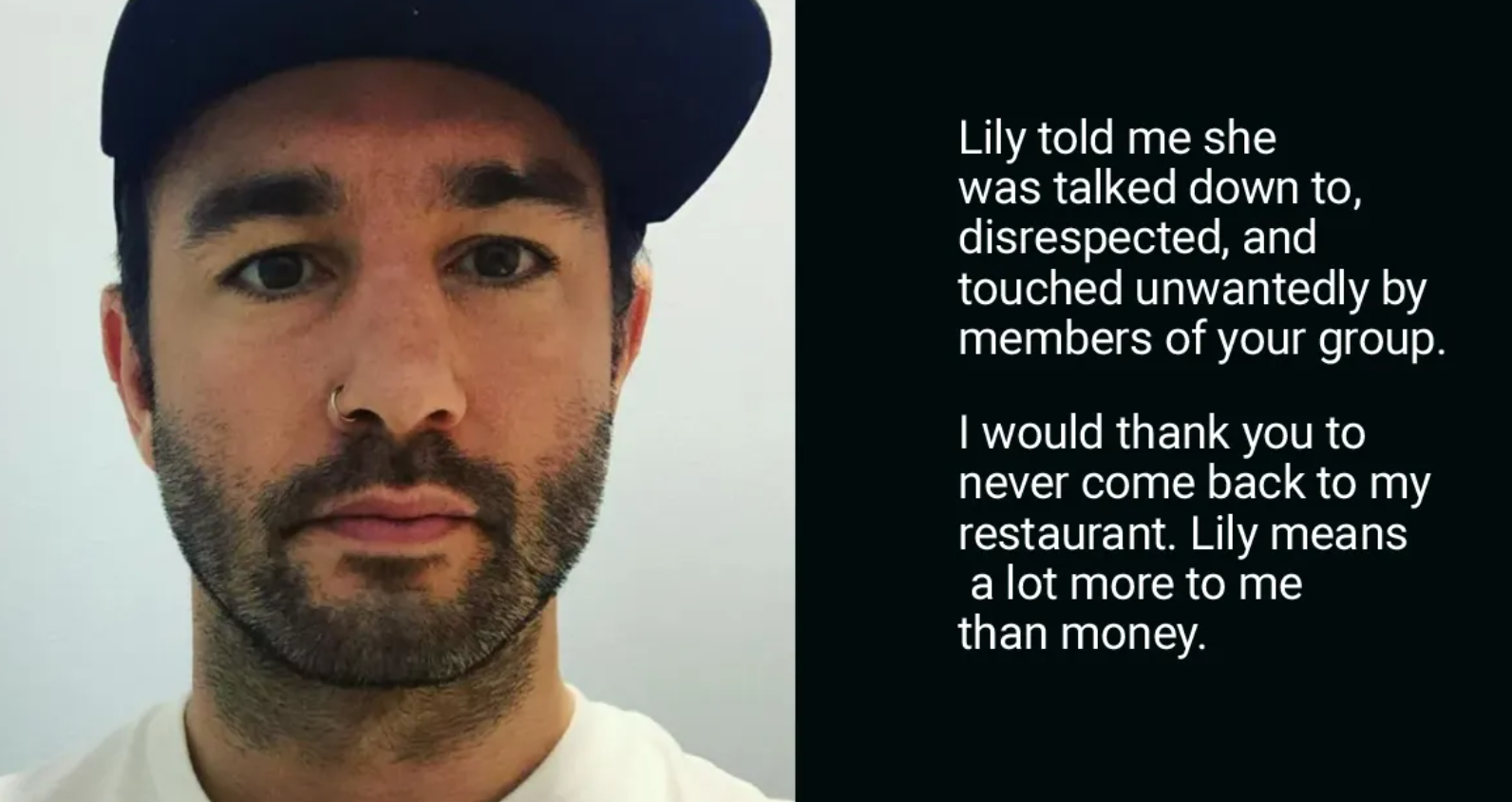 After disrespecting and harassing one of his employees, a chef has barred a group of wealthy guests from returning to his restaurant.

On Twitter, Lee Skeet, the proprietor of Cora restaurant in Cardiff, Wales, released screenshots of the email he sent to the unpleasant customers.

“I’m not pursuing clout or hunting for likes,” he wrote in his post, which has received 14.3K retweets and 132.3K likes. I simply believe we should begin chastising wealthy people who believe they can treat others as scum.”

Lee added in the letter, scribbling out the addressee’s name, that the diner and his friends racked up “the highest bill we’ve ever had on one table here.”

While this was wonderful for his business, Lee discovered that Lily, the employee who served them, had a different story.

“Unfortunately, I was made aware during the evening that your party’s behavior was improper towards lilly, who runs front of house,” the chef explained.

Lily, 22, told him she was “talked down to, disrespected, and touched inappropriately” by the group’s members.

He requested the diner’s bank details so he could return their entire £1,000 bill, minus the £100 Lee claimed they should have tipped Lily because they had left her nothing at all.

Lee also requested that they never return to the eatery.

He said, “Lily means a lot more to me than money.” “I also believe you should evaluate the people you associate with.”

Some Twitter users commended Lee for being a good employer, while others suggested he not repay the money.

Lee felt they had a point after some thought. The next day, he followed up with a tweet explaining that he “reacted too hastily and emotionally.” He then decided not to refund the customer’s money and instead transfer it to Lily.

Lee posted a screenshot of a £1,000 bank transfer to Lily, whose full name is Elisabeth Griffin, in his tweet.

Lee is a well-known chef who has worked with Gordon Ramsay, Marcus Wareing, and Tom Aikens, among others. Cora is his debut restaurant, which launched in January of this year.

He raised £30,862 on Kickstarter in February to purchase a professional kitchen for the restaurant. Lee has prepared meals for diners with household appliances, including “a little oven held together with duct tape.”

“I have an incredible, very small front of house team consisting of the excellent Lily who runs the show at the age of 21, myself when I have a spare moment to serve, and we’re occasionally helped by my incredibly supportive partner Hannah when she isn’t at her full time career!” he wrote on the Kickstarter page.

You may recall hearing about Lee in the news a few years back. He was nearly killed in a hit-and-run accident involving a crane truck in 2017.

“I could almost touch the lorry by the time I spotted it approaching at us,” he told Wales Online. “All I did was fear and push my son as hard as I could.” Fortunately, he was on wheels when the vehicle hit me. It just wiped me out and turned me into a wall.”

The driver ran away, but was apprehended and pleaded guilty hours later. As a result of the offense, he lost his driver’s license.

Lee deserves praise for being a wonderful and caring boss! His workplace is extremely lucky to have him.