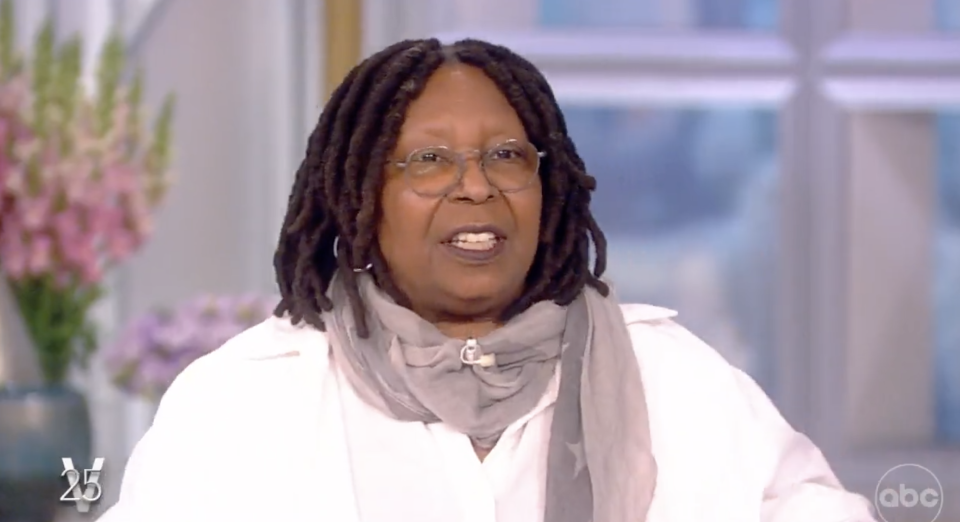 Whoopi Goldberg explains what transpired in the seconds after Will Smith slapped Chris Rock at the Oscars, and defends the “stunned” audience for giving him a standing ovation later in the night.
There has been some confusion about whether Smith was asked to leave the event after striking Rock on Sunday. The King Richard actor apparently didn’t, and he went on to win Best Actor, earning a standing ovation in the process.
Smith was asked to leave, according to the Academy, but he refused. This sparked speculation about how hard the producers tried to make it happen — and why he wasn’t warned to leave. Then, on Thursday, both Variety and TMZ, citing anonymous sources who were there at the show and had firsthand knowledge of how it went down, denied Smith was asked to leave. According to TMZ, Will Packer, the Oscars’ producer, advised him not to attend.
On Thursday’s episode of The View, co-host Sunny Hostin said Smith’s refusal to leave the Dolby Theatre demonstrates “an awful degree of entitlement.” She pondered how he was persuaded to go, given that most individuals would be instructed, “Come with me,” and ushered out. It sounded like it was offered to him as a polite suggestion that he leave.
“I don’t believe that’s how it went down,” said moderator Goldberg, an Oscar winner and member of the Academy’s Board of Governors. “I believe he was asked to depart.”
When asked why he was given the option by guest co-host Tara Setmayer, Goldberg responded there would have been a spectacle on live TV if he had been dragged out.
Goldberg explained, “I’m going to tell you why he had the opportunity.” “They’ve returned from their break. Now, if he’s in a position where he’s struggling and they’re trying to get him out the door — it’s still being recorded.”
Goldberg went on to add that working on a live show is difficult, perhaps alluding to her own recent gaffe, which resulted in her suspension from The View.
“Every day, we work a live show, and things happen,” she explained. Things are different “come out of your mouth or you do something stupid for which you must sit and deal with the consequences. [Oscars night] I can’t imagine what was going on. I was not present… But, in my opinion, the only person on whom anyone should be focused is Will Smith.”
When Setmayer said that Hollywood should do a lot of self-reflection after this, Goldberg defended the audience, pointing out that Smith received a standing ovation shortly after the slap.
“Those who were present were taken aback,” Goldberg added. They rose up and clapped for Smith, she recalled, just as they did for other winners throughout the evening “before you ever realize you’ve made a mistake. I’m telling you what people who were there have said.”
She went on to say, “Do you believe they applauded him for punching Chris Rock? …I believe it was just a case of people doing stupid things… Because I’ve been in similar situations, I’m willing to give others the benefit of the doubt.”
Goldberg took issue with Setmayer, claiming that the standing ovation supports the claim that “Hollywood elites are a bunch of hypocrites.”
“I just want to put an end to all of this ‘elite’ nonsense,” she remarked. “Many of us have to work for a living. We go to work. We receive payment in the form of a cheque. We’ve got kin. We make an effort to do the good things that everyone else attempts to do. It irritates me much… If you’re talking about actors, please be specific. If you’re upset about someone’s behavior, don’t blame it on all of us; that’s like saying all Black people eat chicken.”
They closed by praising Rock’s handling of the situation, emphasizing how quickly things could have escalated if he hadn’t acted calmly.
“Can you imagine?” says the narrator. According to Goldberg. “Let us take a minute to applaud the Academy’s positive aspect, which was Chris Rock… Let’s talk about it since it’s the Academy’s best.”
Source: yahoo.com
Advertisement