Love always manages to find its way. That was especially true for a couple from Chengdu, Sichuan Province, China, who discovered they had met 19 years before thanks to an old image in their family book!

In Chengdu, Ye and his wife, Xue, met and fell in love in 2011. The couple was eventually blessed with twin daughters, but it wasn’t until 2018 that they discovered they had known each other before getting married.

According to Sina News, the couple supposedly went to the May Fourth Square in Qingdao’s beach city at the same time. 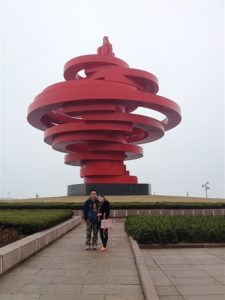 When Ye and Xue visited the park in July 2000, they were still teenagers and had never met before.

Xue was with her mother at the time when Ye went to the park with a tour group. When Xue wanted to take a photo with May Four Square as the backdrop, Ye was caught inadvertently posing for a shot as well! 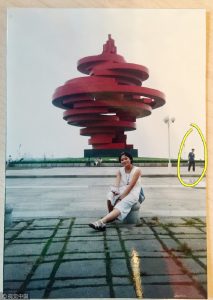 “I was looking at a photo with my wife in front of the May Four Square, and I noticed a man standing in the background.”

‘Oh wait, it was me!’ I exclaimed. According to Chengdu Business Daily, which was translated by Daily Mail, Ye said.

Ye then posted his story on social media, and it quickly went viral, with many of their friends claiming that Ye and Xue were destined to be together. 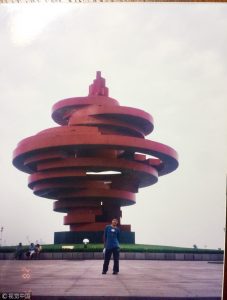 Xue, who was told about the coincidence by her husband, said she couldn’t believe it at first and described the experience as a “miracle” and “fate.”

Friends of the couple agreed that this was a sign that they were meant to be together.

Ye, who now has two children with Xue, expressed his desire to return to Qingdao once their twin daughters are a little older.

Meanwhile, Ye intends to retain both photographs and cherish them for the rest of his life.

According to Ye, he had a plan to return to May Four Square with his family in the future.

“Qingdao appears to be one of the most unique cities in the world” (for us). We’ll return to Qingdao when the kids are older, and the family will take another shot.”