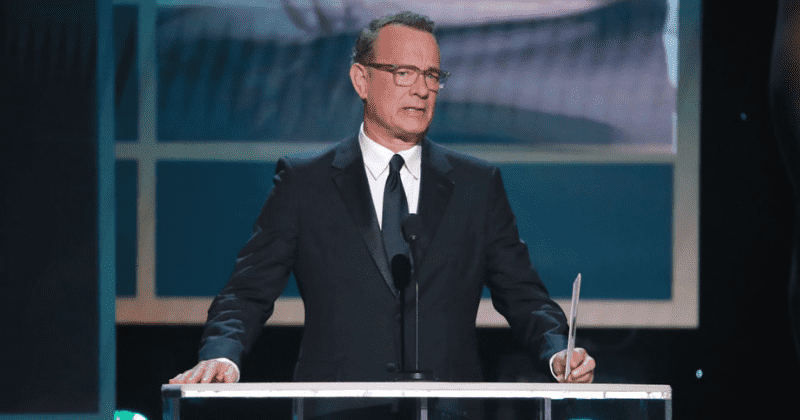 When host Kirsty Young inquired about his parents’ divorce and how it affected him, he grew silent and appeared overtaken with sorrow.

Tom Hanks is often regarded as one of Hollywood’s nicest and sweetest actors, yet he has a tumultuous past. He was devastated and lonely when his parents split when he was five years old, and he spoke about it in an interview on BBC Radio 4’s Desert Island Discs. When host Kirsty Young inquired about his parents’ divorce and how it affected him, he appeared overcome with sorrow and fell mute.

“What have you done to me?” Hanks questioned after regaining his calm. Following the divorce, he and his siblings were raised by his father, Amos, and they lost contact with their mother, Janet, for a short time. According to the Daily Mail, Amos went on to marry twice, leaving his children to deal with an uncertain existence.

Hanks says that by the age of eight, he had lived in ten different houses in five different cities. When he was 7, Hanks had to share a room with his brother and father, and he sought a location where “I won’t be alone, won’t be lonely, instead I’ll feel comfortable,” he remarked. In regards to the divorce, the 65-year-old actor stated, “[The divorce] was about more than just crossfire. I’ve never met somebody who was abusive or enraged to the extent of taking it out on us.”

“I guess I come off in movies as a guy you wouldn’t mind hanging around with.” That’s how actor Tom Hanks once tried to…

Posted by History Is Elementary on Sunday, April 8, 2018

However, he wished his parents had done something for him and his brothers. “We were perplexed since no one had given us any explanations. ‘Hey, listen, you guys are fantastic,’ no one remarked. You haven’t done anything wrong – just give us a few time to figure out what we’re going to do.’ Nobody has said anything like that to us “He expressed himself.

The Forrest Gump actor said that his first marriage to Samantha Lewes, with whom he had two children, Colin and Elizabeth, was a way for him to “quell the loneliness.” “Because I didn’t smoke pot, having a child at the age of 21 was the best thing that could have happened to me. I was not a drug user or a party animal “He went on to clarify. But it wasn’t until he met his current wife, actress Rita Wilson, when he was 27 years old that he no longer felt lonely.

He remarked about Wilson, with whom he married in 1988, “You end up meeting that other person that you’re like, ‘She understands it.” “I don’t think I’ll ever be lonely again,” he exclaimed, “that’s how I felt when I met my wife.” He went on to offer his two cents regarding the “Mr. Nice Guy” moniker that is often used interchangeably with his name.

Hanks claimed he doesn’t like the term at all, and Young confirmed to this presenter that she hasn’t heard anyone say anything negative about him. “You have to dig a bit deeper,” Hanks said, being the humble and funny man that he is.