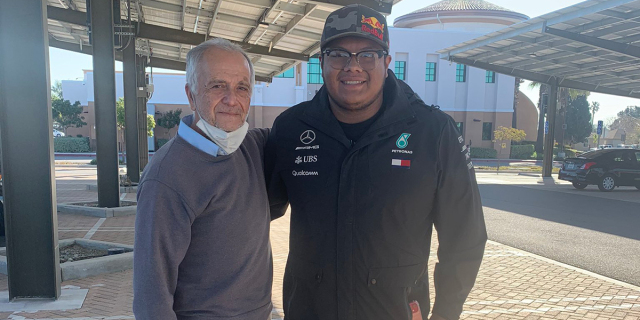 The young man instills in us the value of appreciation.

When the pandemic struck last year, substitute instructor José Villaruel was laid off when classes were moved online. The implications were disastrous for the septuagenarian, who had been sending money to his ailing wife and children in Mexico with his earnings.

In reality, for the previous eight years, the loving husband had been living out of his car in order to transfer money to his family. Now that he is unemployed, Villaruel is surviving on his Social Security payment, the majority of which he has sent to his family.

Thankfully, Steven Nava, a former student, ran across his troubled instructor in a parking lot at 5 a.m. on his way to work. He summoned the guts to contact his former instructor and inquire about his situation. When Villaruel told him about his problems, the 21-year-old felt obliged to assist him: “He really stuck to me just because of the way he was so polite with his students.” He’d inquire about your day, if you ate, and other little things. When he took attendance, he’d be extremely, really funny,” he told CNN.

Nava handed over the $300 he was carrying at the moment. When one of his former students put it, the instructor was obviously moved: “He came over to give me a hug and as he was embracing me, I noticed a tiny tear go down his face.”

Nava was motivated to help even more by Villaruel’s reaction, as he told the instructor he’d do whatever it needed to get him out of his position. “Seeing him live and go through that battle made me want to accomplish this even more. I wanted to support him and make sure he’s in a place where he doesn’t have to worry longer since he helped us with our futures and being the people we are today,” the appreciative young guy stated.

This morning and breakfast now.. he’s so happy. I can’t thank everyone enough. Thursday at 4:30pm we’ll be surprising him with the donations and birthday cake since its his birthday that day. Jack Bulik Park next to Dodgers Dream field. Lets have as many ppl there as possible. pic.twitter.com/FzfBMWlhj3

Nava set up a GoFundMe campaign, which rapidly grew to $27,000 in donations. On his 77th birthday, he handed the cheque to a thrilled “Mr V” with the help of other former students.

The Sheriff’s Department in San Bernardino County learned of his campaign efforts and promptly offered Villaruel temporary housing for a month until a more permanent solution could be found.

The overworked teacher is now planning a short holiday in Mexico to spend quality time with his family. “It is a once-in-a-lifetime event that I will cherish for the rest of my life. It has a special place in my heart. I had a feeling that something was going to happen, that things were going to shift, and it did so unexpectedly… Whatever happens next, I’m prepared. I’m confident that wonderful things will happen,” he stated.