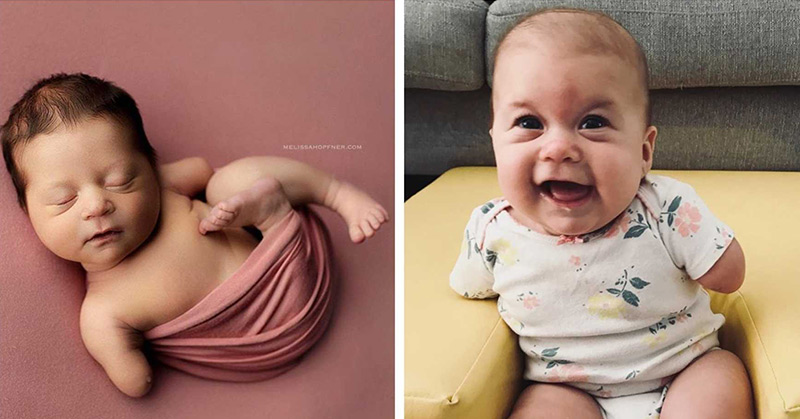 In today’s modern world of modern hospitals and advanced medicine, pregnancy and childbirth carry some risk. And with this risk, every time a baby is born healthy and without complications, it is a miracle. But sometimes things don’t go so well, and babies are born with health problems that doctors can’t explain. This can be scary and heartbreaking for parents of children who not only fear for their baby’s health, but are also unsure whether they will be able to provide for their children’s needs as they grow up. Vanessa McLeod and her husband know what it feels like to experience the same pain, sadness and anxiety when they learned their unborn girl would be born without arms or hands.

When Vanessa McLeod received a call from her midwife after a routine ultrasound she knew something was wrong. When the midwife told her on the phone that there were “significant findings” from the ultrasound, McLeod took her husband to an appointment where she found out there was nothing to look for in their two-year-old daughter. Her husband was not in town, so her mother and father came to the appointment with her.

Vanessa cried all the way home, fearing the worst. At first she thought she didn’t want to lose her baby. After reviewing the baby’s scan, she learned that a cleft lip was possible on one of her thigh bones, that the curve was shorter than other doctors feared, and that was missing her forearms and hands.

“This felt like a punch to the gut. It stole my breath. It keeled me over and the sobs tore out of me, and visions of my perfect little baby shattered,” said Mcleod.

The thought that her baby would be born without arms or hands had never crossed her mind. Over the next few months, the young mother went through a grieving process as she tried to process this new information. Her biggest concern was that her pregnancy was not viable, that something was wrong, that would make it impossible for her baby to survive if she gave birth.

She felt denial, guilt, anger and sadness. Doctors, perinatologists and genetic counselors had few answers for the rattled family to make matters worse. She hopes that there is a reason for this and that there are possible solutions.

From Vanessa’s perspective, it felt like the doctor was just telling her to get over it. The appointment was disappointing in that regard because the doctor raised more questions than answers and tainted the whole experience with so much negativity, McLeod said.

She and her husband were shocked when they proposed terminating the pregnancy and said the little girl would not have any quality of life without arms or hands. She asked her doctors for alternative solutions, and the prostheses from War Amps gave her some hope. The geneticist quickly rejected that option, but Vanessa knew War Amp, and she said prosthetics were never an option because she would still miss her hands. I didn’t understand why anyone would do that.

Vanessa was scared, heartbroken and unsure of what to do next. Upon arrival at the hospital, she hoped her questions would be answered, but in the end, she joined her long list. Her fear was that she and her husband would decide on their own whether to move in together, but her husband calmed her fears, at least for now.

“I will look after her for the rest of her life. I will do whatever it takes. That’s what I’m doing here to build them up. And I can do that for them,” told father.

The baby of the McLeod family has what is known as a defect of the upper and lower extremities, which occurs when parts of the entire arm, thigh or lower back of the fetus do not form during pregnancy. One speaks of a reduction of the limbs because the limbs are reduced to their normal size or completely absent. In some cases, defects in limb reduction are associated with other birth defects, such as heart defects, omphalocele, intestine or other organs protruding from the abdomen (navel 3), gastroschisis (baby intestine outside the body). In the United States, about one in 1,900 babies is born with an upper or lower limb defect.

Vanessa and her husband were undeterred by doctor’s warnings about their quality of life when they decided today to give birth to their little girl because they could not imagine life without her. Throughout the process of her grief, her entire perspective shifted to the belief that she had chosen to be the mother of her daughter. She knew she had to fight for her daughter, stand up for her and love her.

“I need it because I have a complete family in a way I never realized. She teaches me things that I didn’t think I needed to know or didn’t want to know.”

The day she was brought home from the hospital, she hit her milestone. She is happy, healthy and loved. Her parents understand that their daughter will face struggles in her life that others do not have to deal with.

They worry about the days when other children show, stare and say unkind things. They fear that they will not have the right words to comfort and encourage them through these struggles, but they hope that they will be able to build confidence in them as they grow. Her family is ready to love and support her in every way possible. Ivy’s family is affiliated with the Lucky Fin Project, a network of parents all over the world whose children have limb differences due to war and amplifiers and countless other children and their parents have lived with limb differences. While they continue to connect with organizations and people who support their daughter, Vanessa’s goal is to normalize their difference so that the world becomes a more inclusive place.

“I hope to convey to her that her life has meaning and value and will be filled with so much love regardless of appearance or ability,” my husband said. She will be perfect like everyone else.