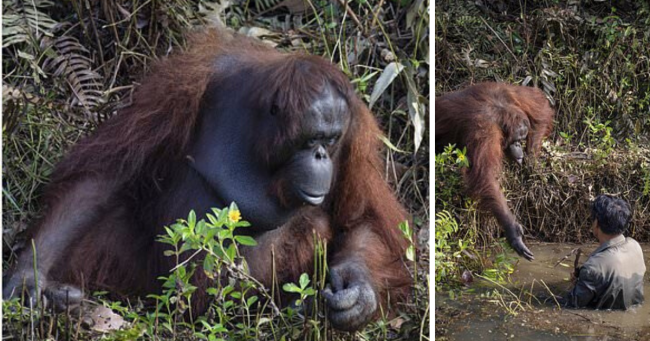 No matter how reasonable, loving, kind and human we try, nature will always find a way to teach us valuable lessons in compassion and purity. Indonesian amateur photographer Anil Prabhakar captured a moving moment during a safari with his friends. In the photo, an orangutan living in a nature reserve in Borneo reached out to a man whose chest had sunk in a muddy river in Borneo. Anil learned that the man worked for the Borneos Orangutan Survival Foundation (BOSF), a nonprofit organization that was founded in 1991 for the conservation of endangered species.

Just a photo of a man clearing out snake infested waters and a Orangutan reaching out as he thinks the guy is in danger/needs help. I love animals so much man. pic.twitter.com/qhqjFzCQ5a

At the time of the encounter, the worker was scanning the area for snakes, which pose a deadly threat to primates.

“Someone told him there was a snake in the river. The warden went there and cleared the bushes. An orangutan came to the banks and was watching what he was doing. He then came closer and gave his hand. The warden just moved away. I asked him why later and he said, ‘It’s a wild animal, not one we are familiar with. But they are to protect them.”

The orangutan came to the bench and watched what he was doing. I asked the warden what to do and he said that orangutans were wild animals, not the ones we know. They are there to protect them. The warden then moved on to something else. And then he came and shook my hand.

Prabhakar admitted he did not expect to witness such an emotional encounter, adding that it lasted for three to four minutes. But he added that he was glad such a special moment happened to him. He posted the photo to Instagram where it has been liked more than 40,000 times.

Palm oil is the most widely used additive in the world and is derived from the fruits and seeds of the palm oil. 66 million tones of palm oil worldwide are produced every year and many forests and land are destroyed to make way for plantations. Between 1999 and 2015, the population of orangutans declined by more than half due to the destruction of their natural habitat for palm oil plantations.

According to the Borneo Orangutan Survival Foundation website, the organization promotes the protection of Borneo orangutans and their habitat as well as the strengthening of communities around the orangutan habitat.

The organization’s 400 staff say that orangutans are listed by the International Union for the Conservation of Nature and Natural Resources (IUCN) as endangered and protected from any kind of persecution of their habitats by Indonesian law. The decline in orangutan populations is a consequence of forest fires, forest destruction, illegal logging and the hunting of orangutans for food and catches for domestic trade. In the last ten years forests have been burned and cleared, thousands of orangutans have died and many have been lost.

Local stakeholders such as the Indonesian Forestry Ministry and many international NGOs such as BOSF are trying to conserve the species and take care of the 650 orangutans. Protecting the habitat of orangutans is important to humans in order to protect wildlife. As one of our closest living relatives, orangutans are intelligent and sentient beings. By defending them and their natural habitat, an abundance of other flora and fauna can also be protected. Orangutans are an icon and an important species of umbrella in Indonesia.