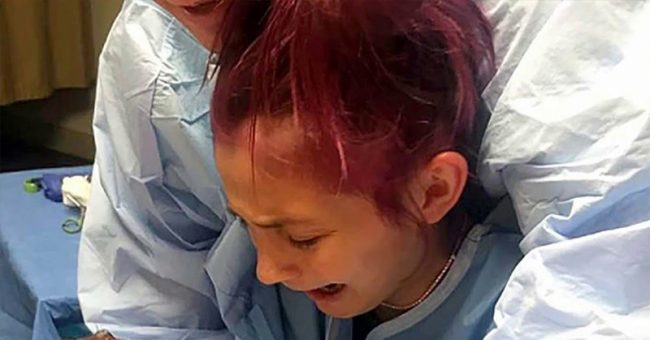 A 12-year-old sister was allowed to give birth to her little brother and the whole thing was caught on camera. The birth story is a unique one that happened a few years ago in Mississippi and is really special. The birth of a new life in the world is the greatest miracle we have ever experienced. It was an incredible mixture of fear, pain, love, confusion and extreme joy.

In June 2017, Jacee Dellapena was on the verge of becoming a big sister for the first time. With her mother’s permission, the doctors let her help them. But there was one small problem: she was too short to see much, and she was afraid of not being able to witness the birth of her brother.

I severed the umbilical cord without help. I played the wrong doctor, but the real deal was the real deal. Little brother Cayson Carraway was born at 7 lbs, 6 oz. Friends and family, including Nikki Smith, captured the moment on camera and posted photos on Facebook. “I was so nervous I was going to screw it up, but it was the best moment of my life.” claim Jacee.

Meet Jacee! This 12 year old helped deliver her baby brother and the emotions on her face is too amazing not to share!…

From then until today, it has been shared more than 337,000 times. The post has received more than 44,000 comments, and while most reactions have been positive, some disagree with the doctor’s decision to let Jacee participate in the procedure. They are concerned about two things: the safety of the baby and the possible emotional and mental impacts that the whole experience will have on Jacee.

There is nothing wrong with your daughter being able to experience this beautiful moment. The moment a woman gives birth to a child is so important to her life story, meaningful, heartwarming and inspiring. It is only the beginning of a bond that will last forever. It’s not as if Jacee would be a rock star if she helped deliver a newborn.

Here are several more birth stories from women around the globe:

When she was 20, she had a job as a receptionist to save money for university. When she learned she was six months pregnant, she planned to have a baby. But she was not prepared to feed herself and her husband and family. Her boss told her to relax and everything would be fine.

When she felt the first contraction, she thought it was a false alarm. She thought that was not the case and went to the birth center. The midwife said she was not dilated enough and had to go home. Her husband bought them a kebab and she felt like she had to go to the toilet. As the situation unfolded, the contractions began to come at intervals of about three minutes.

As it turned out, her baby was ready to give birth. She and her husband flew 800 miles to a natural birth center in Kerala when she was 36 weeks pregnant. She wanted a natural birth, but at the time there was no way she was going to have a midwife in Mumbai. She huddled for 27 minutes before giving birth to her baby girl.

On the second day, she was diagnosed with gestational diabetes. Efforts to control her insulin levels failed and she knew she had to give birth in hospital. Her water broke, she toiled with meconium for three days, her discharge turned green, and she was told she had to have a caesarean section. After a one-hour drive to the hospital, she lay in pain on an operating table, with 30 to 40 students watching.

She gave birth to a sweet boy.

When I was 14, I wanted to find a committed relationship and left my family when I got pregnant. I was homeless at the time, so the court put me in a maternity home to find out what to do about the situation.

After the next two births she felt out of control and when she was pregnant with her fourth child she decided to give birth with her husband at home. She and her cousin were at a softball game when she realized she was in labor. The doctor at the hospital told her that she had actually been in labor for the last three days. She did not want an epidural, but the nurse and doctor insisted. The baby was adopted by her aunt after birth.

They had done all the research and they were ready to do it right away, right now and right here and now.

In the case of their second and third children, the government also took away their babies after birth…

She gave birth to her fifth child in a tent in a Texas park.

Anita’s mother used to be a midwife, and as she was preparing for her second child, she went to her to get help. Her husband helped her give birth locally. She had unusual contractions, but the couple did not call an ambulance because they were afraid the baby would take them away.

When the time came, her mother took her to the hospital and returned to take things away from her. Suddenly the pushing started and the midwife told Anita to cross her legs so she could walk, but gave no further explanation. Anita held on for as long as she could, despite shouting at the janitor and midwife, but it was not possible to wait any longer. The midwife made her open her legs, her water broke, she squeezed and she gave birth to a little girl.

Sima wanted a caesarean. Not content with that, her midwife and consultant tried to change her mind. But Sima was determined to make amends after her traumatic birth experience with her first child three years earlier.

Two weeks before her due date, Sima was induced, but the baby reacted badly to the medication. His heart rate plummeted three times and she ended up having an emergency caesarean. Sima booked her first caesarean baby five weeks before the birth. On the way to the hospital, she was calm and excited.

She was allowed to choose what music she wanted to listen to in the operating theatre. About 15 minutes before the procedure began, despite the trauma and stress, she pulled up a song, “Tear Dry,” by Amy Winehouse.