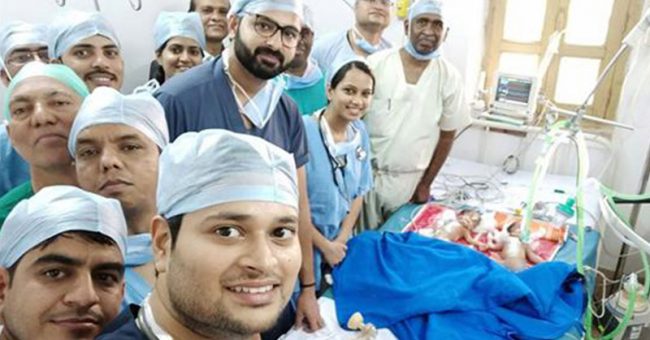 There are several theories about the cause of conjoined twins, and one suggests that two separate embryos fuse together during early development. Another theory is that the embryo splits about 13-15 days after conception, and the separation stops the process, thereby connecting the twins. However, these theories do not help much when confronted with the establishment of a conjoined twin in real life.

The University of Maryland Medical Center says about 200,000 live births involve conjoined twins, of which between 40 and 60 percent are stillbirths and only 35 percent of twins survive longer than a day. The most common types of twins are connected to each other at the chest and abdomen, and the success of separation surgery depends on where the twins were joined. Doctors must determine which organs the twins share and plan the surgery before they are born. A twin can survive up to 75% of the time.

At the beginning of December 2018, five surgeons, ten doctors and fifteen nurses had the difficult task of separating two conjoined twins. More male twins were found to be connected in the womb than female twins, and females were three times more likely to be born alive than males. As a result, female siblings seem to have a better chance of survival than their male counterparts.

When the twin sisters were born with their stomachs bandaged, doctors were not sure if they would survive. Their parents were hopeless and could not afford the medical costs. Three days later, doctors said the twins had a better chance of living longer if they were separated. The twins were born at S. S. Hospital in Varanasi, India, and weighed a total of seven pounds.

At this point, the surgeon assured them that they would not have to pay a penny and that the hospital would cover all the costs. The parents agreed to confide their fears to hospital staff. The five long hours of challenging work ended with success.

On December 6th, doctors anaesthetized both girls simultaneously and then went in to separate the breastbones and livers. It was one of the rarest operations at our hospital, said Dr. Vaibhav Pandey, Assistant Professor of Pediatric Surgery at the Surgis Hospital. “It was a very rare operation and I am very lucky that both girls survived.” clam the doctor. Once the girls were ready, doctors planned to discharge them a few days later. Capturing a moment of joy, the medical team took a short celebratory photo.

It has also been reported that they were named after traditional rituals that are performed when they come home. This incredible story is an example of the dedication, love and care that families experience when they walk through the doors of a hospital.