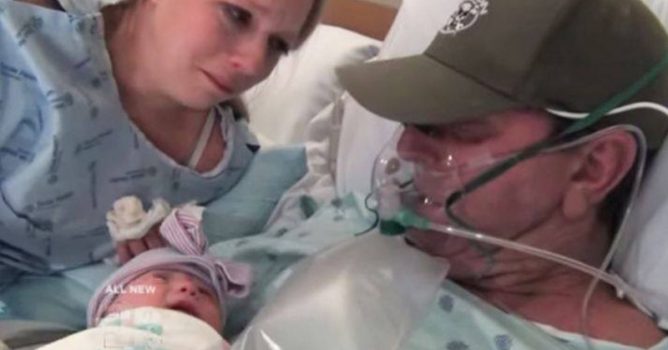 A Texas woman decided to deliver her baby two weeks early so her husband could meet his daughter before he died. The closer the expected birth date approaches, the more eager parents are to meet the newborn. We count down the days, spend time preparing for our new family members and welcome the new life that will make our home a paradise on earth. Every new baby in our family is a real blessing and every day counts, but the closer we get to birth the better.

While the birth of a baby is a joyous event for most families, it can also be a heartbreaking experience for some. Diane Aulger of Colony, Texas, gave birth to her first child two weeks early to meet her husband’s birth mark.

In April last year, he was diagnosed with bowel cancer at the age of 52 and after an operation to remove the cancer, doctors gave him precautionary chemotherapy, which severely damaged his lungs.

In most cases, the symptoms are treated with medication and therapy, but the damage is incurable. The negative effects of chemotherapy are often due to the fact that the treatment affects not only the lungs but also the liver, kidneys and other organs of the body.

This often leads to loss of blood flow to the liver, kidneys and other organs of the body. Although side effects vary depending on the type of chemotherapy, there is a good chance that the patient will suffer nausea, vomiting, diarrhea, abdominal pain, nausea and vomiting, and even death.

As Diane Aulger prepared to give birth to her fifth child, Mark’s condition began to deteriorate rapidly. At first, the family was optimistic that Mark would recover, but unfortunately the reality was far from the truth. He was told that his condition was not improving and that he only had five or six days to live.

The friendly hospital staff made sure that the Aulgers shared a large delivery room and their beds were next to each other. Diane explained that the baby was due to be born on January 29 and was due to be born on February 18. They had planned a natural birth, but when doctors suggested other options, they agreed. His last wish was to see his newborn before he died, so he agreed to a two-week delivery two weeks early.

On January 21st, he fell into a coma and died two days later, but he felt he could be held and felt again the next day. After her birth, Mark was allowed to hold his little girl named Savannah for 45 minutes and she was held by him for the rest of his life.

Diane said she brought her newborn daughter home from a coma the night before he died and she was by his side. Since his death, Aulger’s house has been bombarded with gifts, and he is survived by her and Savannah.

Friends, family and even complete strangers have donated food, clothing, diapers and cash to support the single mother of five. When a California businessman learned of the story, he donated money so Diane could buy a minivan. Diane Aulger said: ‘I’m so glad to know there are so many cares out there for me.

The family are doing their best to keep Mark’s memory alive, with Diane saying: ‘I plan to take pictures of the kids with their funny dad all over my house and they talk about him all the time. I know he was a father to all of us and I am so proud of him for his hard work and commitment to his family.