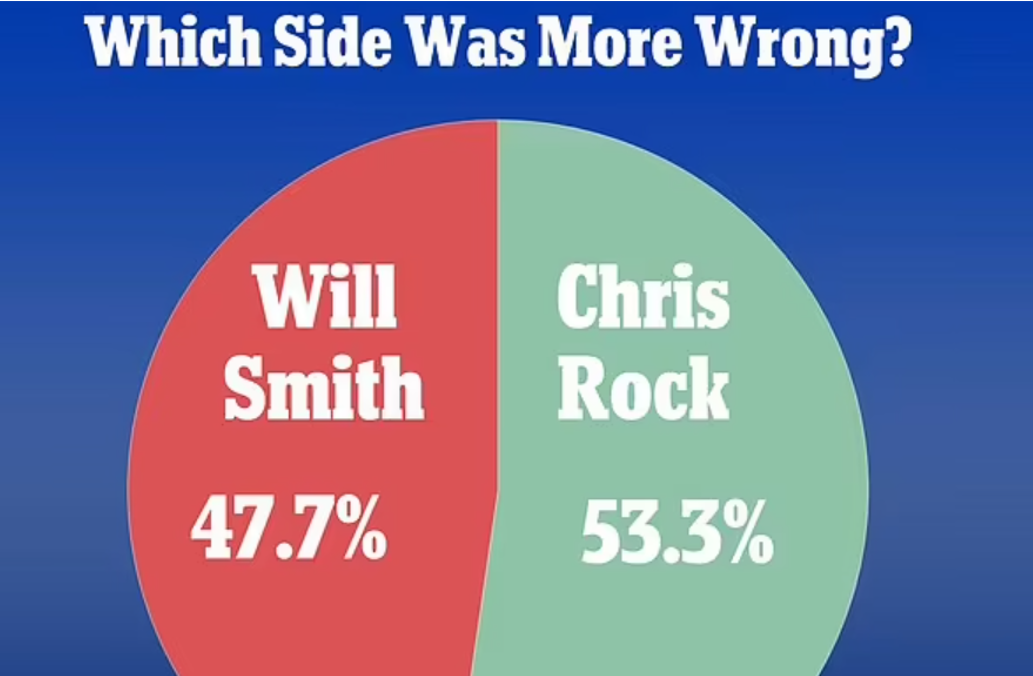 According to new polls, 3 in 5 Americans disapprove of Will Smith’s slapping of Chris Rock at the 94th Academy Awards after a poorly received joke about Smith’s wife, actress Jada Pinkett Smith, at the 94th Academy Awards. However, some argue that Rock was “more wrong” than Smith in the Oscars altercation. And those aren’t the only outcomes that appear to be at odds.

In a poll of 1,319 Americans, 61 percent believed Will Smith was “wrong to punch Chris Rock after his joke” (only 21% claimed he wasn’t, and 19 percent said they weren’t sure — so, Tiffany Haddish, it is what it is).

Indeed, 59 percent of respondents in the United States believe it is “never OK to hit someone for something they said.” Jaden Smith, on the other hand, is clearly against it.

While 39% of respondents “disapprove of the Academy Awards letting Will Smith to stay on the show after hitting Chris Rock” (compared to 34% who approve), they overwhelmingly believe Smith should keep the Oscar he won that night (70 percent to 16 percent ). After all, Roman Polanski and Harvey Weinstein are still alive and well.

Another poll, performed by Blue Rose and involving 2,162 online respondents, looked at the larger topic of “Which side was more wrong?” In that poll, 52.3 percent of respondents said Rock was “wronger” than Smith. Again, the biggest divide was between those aged 18 to 34 (57.8% believing Rock was more wrong) and those aged 65 and up (51.8 percent saying Smith was more wrong).

The way the question is phrased is crucial: “You may have heard about an incident at the Academy Awards program last night. The host, comedian Chris Rock [note: Rock was a presenter, not the host], joked about Jada Pinkett Smith’s hair loss, suggesting that she should be cast as G.I. Jane in a film. Will Smith, her husband, stormed the stage and hit Rock across the face in retaliation. Who do you believe was more at fault?” As a result, the answers were not necessarily about whether Smith’s slap was warranted, but rather a direct comparison of the two men’s aggressive behavior.

In a strange twist, a OnePoll poll of 1,003 Americans indicated that 66 percent “think Smith should be arrested,” while 62 percent still thought “the slap was justifiable” in the same poll.