A kind 12-year-old offered her only five bucks to a homeless woman she observed resting on a bench while walking on a boardwalk with her family.

“This is my daughter,” says the narrator. She is 12 years old. Greg Peterson wrote on Facebook, “Today she gave me a proud father moment.”

Greg Peterson and his family were on vacation, and his 12-year-old daughter wanted to spend the five bucks she had in her pocket on anything while strolling along a boardwalk.

“We’re on vacation, and she’s had a $5 dollar burn a hole in her pocket since we arrived. She’s begged to buy things several times, and I’ve urged her not to spend her money.”

Her father didn’t want her to squander her money on frivolous purchases, so after several requests, he started telling her no when she asked, even when she asked if she could donate it to a homeless person since he didn’t know she was serious.

“Well, today we’re at the boardwalk, and she walks into the coffee shop where I’m working and orders beverages for myself and the Wifey.” “Dad, may I give my $5 to a homeless person?” she says, looking at me. No, I answered with a chuckle. I had no idea I was about to feel stupid. “I had no idea there was a homeless woman sitting across the street from the coffee shop.”

“The lady wasn’t begging for money; instead, she was sitting alone and forlorn.” When my daughter questioned why I giggled when she asked whether I would give the lady her money, I said yes. I apologized and said that I hadn’t realized there was a homeless woman outside.” 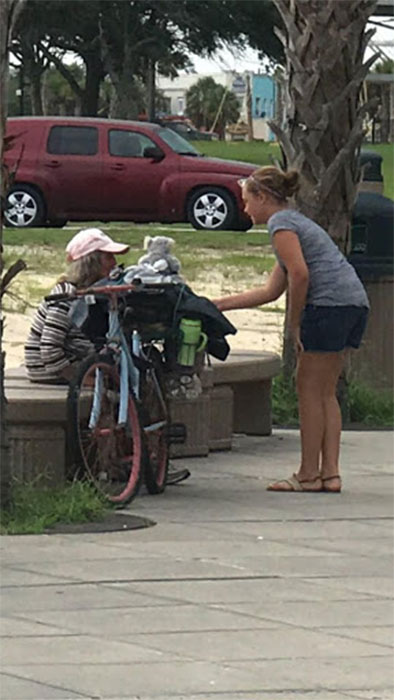 “We walked around the boardwalk, and the woman was still sitting there on the way back.” My daughter did not ask to spend her money once throughout the entire time she was walking the boards. Yes, you may give her your $5, I said as I glanced at my daughter. She expressed gratitude for earlier urging her not to use it, and expressed hope that this woman might acquire food or something to assist her out, despite the fact that it was just $5. “She has a huge heart.”

Before they departed, the homeless woman gave Greg’s daughter a kind wave and a beautiful moment.

“On our way out, we passed the woman again, and she gave my daughter a small wave of appreciation, which she returned. I told her she done a wonderful thing, and she realized she should be proud of herself for being able to assist someone in need. Children have a way of demonstrating that mankind has a chance.”