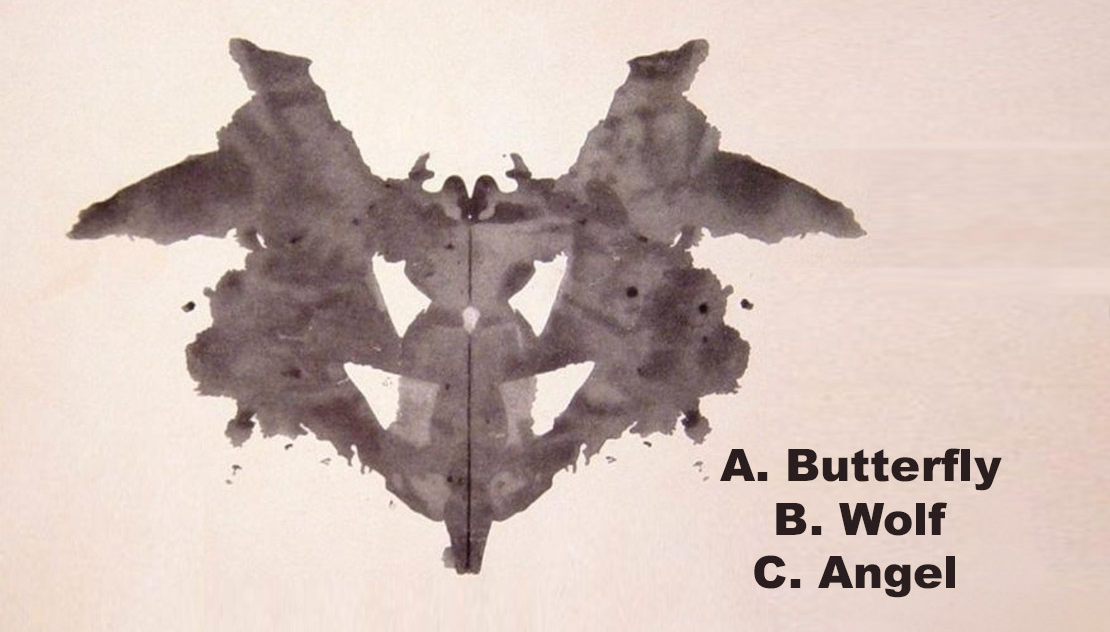 Do you know what the “inkblot test” is? It’s one of the fastest personality tests, created by Swiss psychologist Hermann Rorschach.

Despite the fact that it is still a contentious test in the psychology field, many practitioners still use it to discover a person’s personality characteristics.

It’s a projective test, which means the individual taking it must come up with their own interpretation rather than selecting from a list of possibilities.

Here are 10 of the most famous Rorschach test cards.

What do you think you’re seeing in each case?

Keep in mind that this isn’t a complete list; rather, it’s a sampling of the most typical replies.

When most people look at this card, they envision a bat, a butterfly, or a moth.

These interpretations point to a stable emotional state as well as a positive self-image.

However, other people see a wolf or a scary visage, which might indicate that you’re suffering from paranoia or despair.

Some others perceive an angel with spread wings, implying that you are a childlike, light-hearted person.

If you see two animals or figures attacking or clinging to a third figure in the middle, it might indicate that you are feeling threatened by others in your life.

You have a peaceful relationship with people if you see two figures connecting with one another, maybe over a table or pot.

If not, you may find it difficult to communicate with loved ones and need to work on your communication skills.

If you witness two individuals fighting or think the red ink is blood, it means you’re holding back a lot of aggression.

This card has long been used to determine one’s sexual orientation.

A heterosexual individual, according to certain interpretations, will see two males, whereas homosexuals are more likely to perceive feminine or androgynous characters.

Using the card as a gauge of your attitude to relationships is a more contemporary method.

If you see two individuals leaning in to establish eye contact, you may be longing to bridge a divide in a significant connection.

This is also known as the “father card” or “authority card.”

It indicates how you interact with people in positions of power in your life.

The majority of people imagine a giant with enormous boots or a massive animal such as a bear.

If this image makes you feel afraid, it’s an indication that you’re at odds with someone in power in your life, such as a boss or an older male relative.

The majority of individuals will notice a bird, a bat, or a butterfly. Mental stability and a healthy imagination are indicated by these so-called “normal replies.”

When you encounter crocodile faces, you may get aggressive sentiments.

If you see a pair of scissors, such as in the lower middle of the image, it might indicate that you are afraid of being weak or helpless.

When gazing at this inkblot, the majority of individuals will see sexual images.

Most psychologists believe that if you can’t see either female or male organs, you’re having a sex issue.

If the blot is seen as a mountain, it represents a feeling of worry.

You could feel as though you’re up against a formidable obstacle or that life is an unending “uphill battle.”

This card is regarded as the “mother card,” and its meaning reveals how you feel about your mother or other important female characters in your life.

To the ladies around you, two women sitting together and conversing, or just standing together, suggests healthy relationships.

If you picture two fighting or nasty figures, you either have a negative attitude toward women or have unsolved difficulties in your mother-daughter connection.

If you see a heraldic crest or emblem, it means you have a high ability to synthesize complicated information and have a broad feeling of personal wholeness.

You should see a four-legged creature on either side, according to conventional readings; otherwise, you may have a basic deficit when it comes to recognizing patterns in your personal or professional life.

If you notice a spine in the image’s center, it means the person is an excellent leader.

If you see two animals attempting to flee a fire pit, you may be dealing with unresolved guilt or personal issues that require immediate care.

If you see two battling figures, it means you’re in the middle of a battle and may have weak social skills.

The most typical responses are explosions and flowers, which indicate that there are no special issues.

If you see a couple of stags towards the top of the image, it might mean you’re aiming for the stars or trying to make positive changes in your life.

You feel strong in your personal or professional life if you observe a rocket shooting from the middle of the card.

This is a difficult card to read since there are so many signs and symbols to decipher.

If it makes you uncomfortable, you may have trouble managing yourself and others in daily life, or you may become quickly overwhelmed.

The majority of people perceive a variety of animals, including rabbit heads, worms, and snakes, to mention a few.

The more you can see, the more creative you are in general.

Please pass it on!

Before psychologists can utilize the exam to create a full profile for their clients, they must first acquire extensive training.

However, a short scan at the cards can still provide you some insight into your personality.

Why don’t you ask your friends and family what they think they’re seeing?