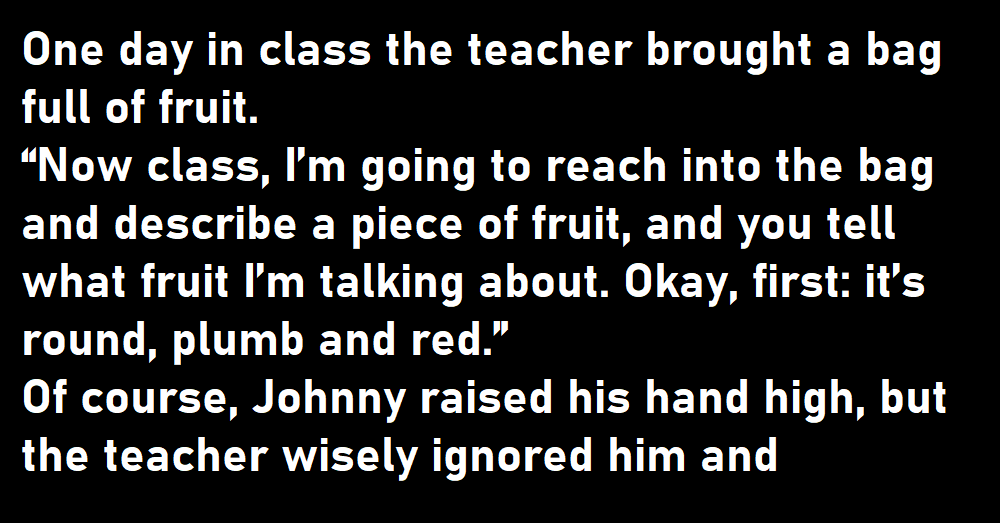 Of course, Johnny raised his hand high, but the instructor cleverly disregarded him and chose Deborah, who responded immediately with, “An apple.” “No Deborah, it’s a beet,” the teacher answered, “but I appreciate your thinking.” “All right, now for the second. It’s fluffy, furry, and reddish brown in color.”

Johnny, on the other hand, is bouncing around in his seat, attempting to persuade the teacher to call on him. But she ignores him once again and dials Billy’s number.

“Is that a peach?” says the narrator. Billy inquires. “I’m afraid it’s a potato, Billy.” The teacher, on the other hand, responds, “I appreciate your ideas.” Another one: it’s long, yellow, and quite tough.”

Johnny is on the verge of exploding as he furiously waves his hand. The teacher dismisses him once more and summons Sally.
She says, “A banana.” “It’s a squash,” the teacher responds, “but I appreciate your thinking.”

Johnny is furious at this point, so he shouts up loudly. “Hey, teacher, I’ve got something for you; let me put my hand in my pocket.” Okay, I’ve figured it out: it’s round and hard, and it got a head start on it.” She screams, “Johnny!” “That is revolting!” “It’s a quarter,” Johnny responds, “but I appreciate your thinking!”