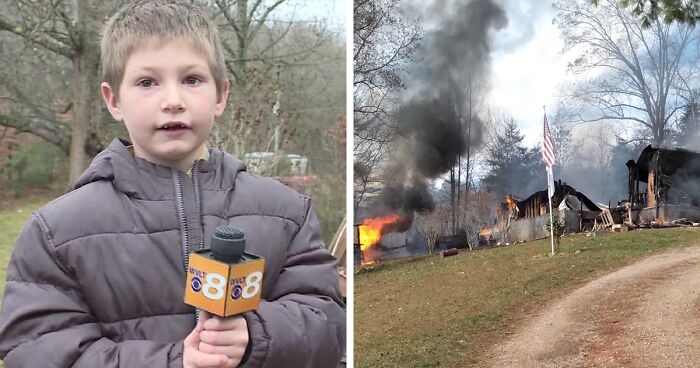 Few people can match the bravery displayed by this seven-year-old kid earlier this month. Eli was the one who saved his newborn sister from the flames when his family’s home caught fire.

A boy saves his younger sister from a house fire.

Unfortunately, the smoke was too heavy for them to enter Erin’s room, where she was 22 months old.

“There was no way I could get to her because the smoke and flames were so thick,” Chris Davidson told CNN.

“I feared I wouldn’t be able to accomplish it, but then I told my father, ‘I got her,’” Eli recounted. “I was terrified, but I didn’t want to lose my sister.”

“It’s OK to feel scared,” he said, “but you’re courageous on the inside and you can do it whenever you want.”

Eli and Erin were able to safely flee through the window just in time. The home burned all night, and by morning, there was nothing left.

Of course, Eli’s parents are incredibly proud of him. Many fully mature people would not have the courage to accomplish what he did. The Davidsons, on the other hand, have always worked hard to establish a strong feeling of family in each of the children they help raise.

Eli is one of the 34 children Chris and Nicole have fostered. Both Elijah and Erin are adoptive children. Eli’s sense of commitment to his family is clearly a result of the affection he received from his foster parents.

Nicole and Chris were both firemen who were laid off as a result of the epidemic. The family has now lost their house and all they own in a year that has already been difficult for them.

“It’s a disaster. “We don’t have anything,” Chris adds. “When you don’t even have your own underpants to wear, you’ve never been as humble as you are now.”