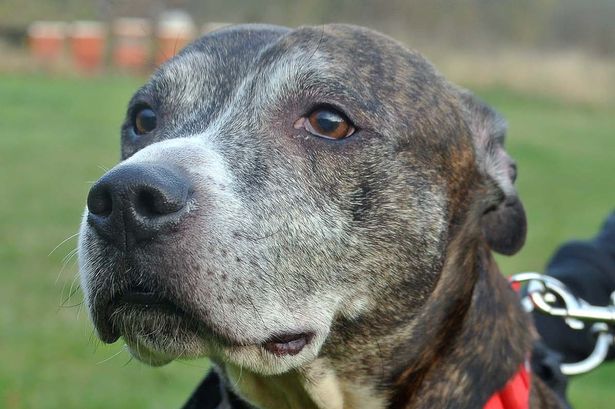 This dog was left homeless and heartbroken after his owner died. He had a full life before he died, and now he has lost his spark. His story has made headlines, and many people feel sorry for him with such human grief. He is now living a good life, having been rescued from an animal shelter and awaiting a new home.

A Dog With a Broken Heart

According to their Facebook page, Good Life Dog Rescue is a dog rescue charity which helps abandoned dogs in Yorkshire. The shelter has many dogs for adoption and accepts donations from everywhere.

On November 25, the shelter posted about Albert’s predicament on its Facebook page. They explained how Albert loved petting and human interaction and how it seemed to cheer him up in memories of life with his previous owner. Volunteers were determined to find him a home over the festive period. They found him curled up with his eyes open and grieving. Albert is a nine year old senior in the kennel.

“We had visions of Albert curled up by an open fire at Christmas in his new slippers”, they wrote. “While we were happy, the sad Albert face was gone and he was happy again”. The post went viral with over 46 thousand shares.

Many people applied for adoption. Some shared photos of the beautiful stories of their rescued dogs. Good Life Dog Rescue thanked everyone who offered to bring the dog home. 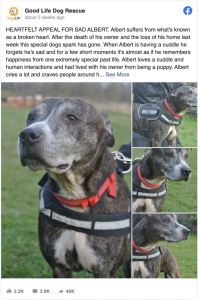 Two days later, the group returned to Facebook to share the good news that the dog would have a reunion on Saturday. When people’s hearts were focused on the dog, many applied to adopt it.

“On Saturday, Albert will be greet and meet with potential adopters and just additionally, there are a lot  waiting in the wings. We had 75 calls yesterday and 50 applications for Albert. We remind people that they have lonely hearts and dogs like Albert need a good home”.

People were excited about Albert’s happiness and wished him luck in his upcoming meeting. “I hope he gets a good Christmas present from someone who loves him. Good luck to him”, one commenter wrote. “His story broke my heart”.

An update came on November 28. “Today our handsome chap had two lovely visitors. He took a long walk and spent some time with his new parents”, they wrote.

“They now want to bring him back to a place where they hope to heal his broken heart. We are overwhelmed by the tremendous response we have received from all over the country. We have received over 200 calls and so many applications in the last three days. Our dog has become something of a celebrity after finding himself in the national papers. The volunteers have worked overtime for us and it has inspired so many people to take an interest in their mission to find a home for this dog”.

On November 30th Albert found his new home with Garth and Jo in Gainsborough. A volunteer at the shelter saw Albert smile for the first time in many days as he jumped into Garth and Jo’s car. In his new home, he already ate hearty tea with his new family, walked around town and played with his new bunny toy.

The comments were filled with good wishes for the dog. A coworker with a smile will never be forgotten by the homeless. “Happy life, folks, thanks for a good life. So happy for Albert and his new owner”, ‘said one. “They’re so lucky to have found each other”.