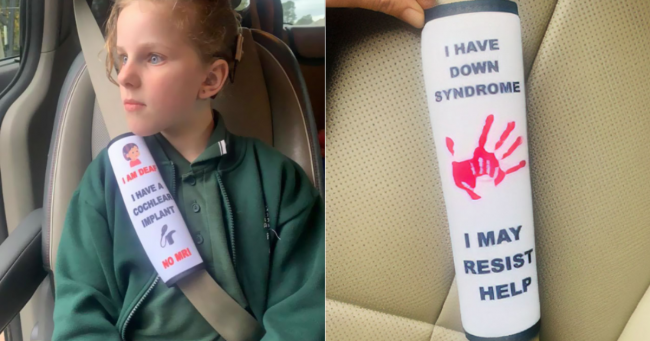 A mother’s empathy is one of the most powerful feelings, and when it comes to her concern for her children’s safety, the sky is the limit.

Natalie Bell, a mother of five from Victoria, Australia, was concerned about what would happen if her daughter was involved in an accident, so she devised a method of explaining her medical conditions or requirements to others. 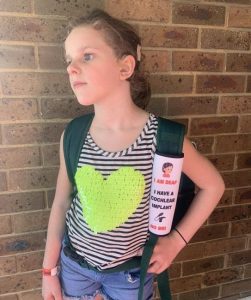 Shae, her daughter, was born with a moderate hearing loss, but by the age of one, she had lost the majority of her hearing. Bell learnt Auslan, or Australian Sign Language, after learning about Shae’s disability. 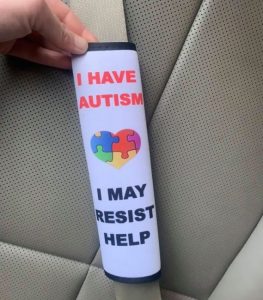 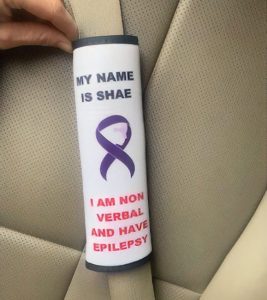 She has a cochlear implant, which is a surgically implanted device that gives those with moderate to profound hearing loss a feeling of sound. She should not, be exposed to the magnetic field of an MRI because of the implant, which can cause damage.

As a result, the mother wanted to discover a means to ensure that if she was disabled in a vehicle accident, doctors would be able to provide the finest possible care.

Natalie saw her daughter’s vulnerability in the event of an accident, which led her to build a useful device.

The end product was a personal seat belt cover that alerted first responders to any medical conditions a child might have, allowing them to respond accordingly.

Natalie produced a version for people with different illnesses after realizing that the same concept could help other children with impairments, and she advertised her creation on Facebook to promote the covers.

Natalie says she’s been swamped with praise from parents, firefighters, and police officers, despite the fact that she didn’t expect any of it.

Natalie is the owner of Personalized by Nat, a company that provides customized items, especially for pets and children. Bellt Alert coverings, her newest creation, can be placed around a seat belt.

The sea cover has a white background, and the writings can be easily read even in low light or from a distance because they are printed in large, bold letters. 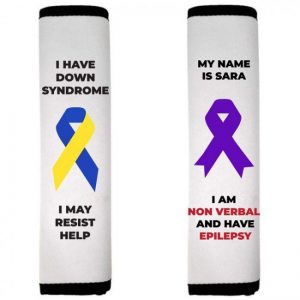 Furthermore, because they are Velcro-based, they may be used with both school bags and seat belts.

Natalie always feared that in the worst-case scenario, she wouldn’t be able to speak with their rescuers because her daughter’s cochlear implant didn’t allow for an MRI.

As a result, her ingenious seat covers gave alleviation. 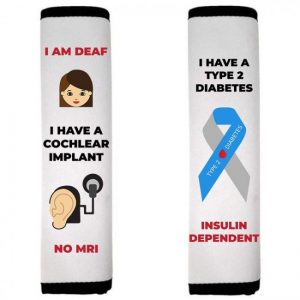 The seat belt cover can be used to communicate a variety of information, medical or otherwise, and can be attached to seat belts or backpack straps.

These seat belt coverings are customized because each child’s needs are unique. Some covers even state that the youngster has communication problems or that he or she would refuse to accept help from strangers.

Because the seatbelt straps are portable, they can also be used on backpack straps for school or hiking, bus seat belts, or any other vehicle. 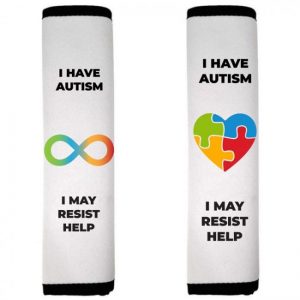 All of them are designed by Bell, and they address a wide range of medical disorders such as autism, Down syndrome, diabetes, and epilepsy.

Other similar goods, such as medical wristbands, frequently go unnoticed in an accident, but the seat belt cover is the first thing an emergency responder notices when arriving at an accident scene to rescue or remove a child.

Natalie’s website sells the covers for $15 each. A customized product, on the other hand, normally takes 15-30 days to arrive due to exceptionally high demand.

Bell claims that she can customize the seat belt coverings for a variety of reasons, including our loved one’s care in the event of an emergency.